The Power of Full Moons: "Best of luck, kid."

It would be difficult to impossible to sum up last week quite quickly, but I’m going to do my best. I would like to preface this by reminding everyone that my Saturn retrograde is due to exit my sign this weekend. And I’m nearly convinced that all these things are going on as part of that shift. The stars also suggested last week that I would encounter items of closure, particularly in relationships – being romantic, platonic or professional. And lastly, said: "At the end of the month, a high-powered Aries full moon lights up your seventh house of committed partnerships. A relationship that had a turning point in April, around the Aries new moon, comes full circle now."

As PI would later put it, “Dickens was writing your Saturday…you had a sexual Christmas Carol going on.”

First, let me preface this by saying that earlier in the week 1. MH, a guy from online dating I’d been kind of seeing, but had no real interest in stopped talking to me because on Sunday I suggested he go home and not sleep at my house, which he totally invited himself to do, which at first I agreed to because hi. I like to spoon. I like to kiss. And don’t really tie anything to someone sharing a bed – but then he waffled about leaving (at least 4 times he said “I’m leaving”. Then “I’m staying.” “I’m leaving.” “Okay, I’ll stay.”) It was like goodbyes by Anne Heche. After all this, I decided wanted to sleep well and suggested he go home and would thank me tomorrow. And gave him a kiss before going. To which he responded. “Are you fucking with me”. Yes. I’m fucking with you. I like to cuddle. I like to kiss. I also like to sleep in my bed alone before a long week. But sure, ya, I'm just fucking with you.

Can you hear my eyes roll?

So I guess he decided to pout. And as I discussed with a girlfriend the next day: eventually he was getting the boot, so he gave himself his own out. Works for me. So that’s the end of that.

Also, 2. Last week HG started chatting me up again. He had briefly contacted me the week before and I had discussed with a girlfriend how uncomfortable it made me: Like I was talking to a stranger I felt like I should know, but didn’t. Last week was more of a comfortable conversation. So, that's nice, I suppose.

And then 3. The Ex emailed me back about a situation that happened months ago. He randomly texted me – we don’t talk much since he started dating the last girl, I assume – and I ended the conversation “don’t be a stranger” to which he replied “I will” and I went off. Because, well, this. And vodka. So I finally remembered to reply to his email and say thanks and explain that this is why I got upset. His response was pleasant and added that he is engaged. "Good" was my first thought. It was never my intent to break both of our hearts so that we could end up alone. I’m happy that he found someone. My second thought was that it bothered me that he seemed hesitant to tell me because I would be upset because I’m almost 29 and single. I chose this.

So, world, not every 29 year old wants to be married, mk?

So then the culmination of a week of so much weird happened on the full moon on Saturday. After an 11 mile training run, I went kayaking with friend and roommate of PE (who had subtly and not-so-subtly been attempting to get in my pants on and off since NYE), then out with GFC in an area we both realized we were heading to that night, so he said he’d meet up with me and maybe "borrow my bed" (uh-huh) after the bars so he was closer to where he needed to be in the morning. See also: Spooning.

And it started out like this: We walked in the bar and upstairs and I saw the side of the head of PE. He didn't see me and in a very HIMYM moment I immediately turned around, ducked and walked back down the stairs. Meanwhile, my girlfriend has no idea and is at the stop of the steps yelling down to me "No, that's the bartender we know!" So I signal for her to come down the steps and say "I think that's [PE] up there". She goes up to check; comes down to confirm. We relocate to the back bar downstairs where another bartender we know is usually working (till and we, or I rather, get tipsy enough to not care about the awkward situation that will be upstairs). He is. And we are immediately 1. hit on and 2. and more importantly, given free drinks and shots. It was like bugs to a fly strip. I felt like I was living a sitcom.

I then texted the guy I went kayaking with and asked if he was out with PE. He replied "No, is he out?".

"He's here," I responded. He laughed and later showed up to the surprise of his roommate. After a bit, we did go upstairs, now with a strange entourage of guys really hoping to take either of us home – one of which would later pout. Why? Well…let me tell you.

Remember Football guy from February? We had chatted via text until April and then crickets, which was fine; what did I care? Well he texted me Labor Day weekend (at 2am) that he was in town. I was out of town; told him try again. On Saturday he texted me; he was in the area and out on the other side of DC. I told him the area I was – expecting to hear “Oh maybe next time.” About 30 minutes later, he texts that he’s next door to where I am and I tell him to come to our bar. He does.

I talk to him, the guy that had followed me upstairs (strangely assuming I would go home with him; of which I gave no indication) is now throwing a fit “he stomped around and I’m pretty sure his nostrils were flaring”, my girlfriend later recounted.

So now my kayaking friend (who is waiting to see if he can get into my pants bed) is standing against the wall, well-aware his convenience sex bed is now in jeopardy, and next to his roommate (who’s game we clearly crashed) that I used to date (or something like it). The other guy is throwing a fit (nostrils flaring, I'm later told), while I'm talking to this rando I met on a sidewalk 7 months ago.

Time and drinks pass and next thing I know, I’m outside my house on the sidewalk. FG had paid for a cab. We’re making out outside when he stops, looks at me and says: "I have to be honest. I have a girlfriend. I should go."

Slightly dumbfounded and pretty annoyed, I go back to my house and mildly scold him for being an idiot via text. YOU CHASED ME DOWN, you ridiculous turd, I thought. He texts back that night overly and weirdly apologetic about that situation (sounding on his side like he was breaking up with a girl he’s known forever). 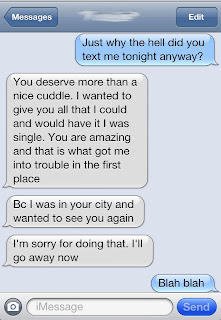 What. I mean wait. WHAT?! This weirdness lasts a little longer. I say goodbye. I pass out.

I wake up and realize that the lying was annoying, but I suppose that it’s respectable that he has this new girlfriend he wants to respect. I text him today to tell him that I’m not upset with him because we all do dumb shit some time. And this, my loves, is the exchange that followed: 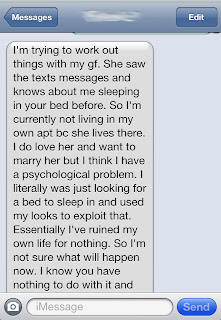 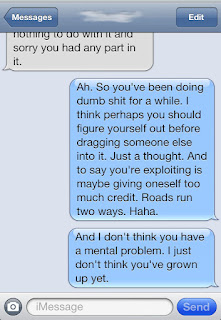 And then I shit my pants* because WHO DOES THAT. And who says that?! AND HE'S HAD A GIRLFRIEND ALL ALONG?! ...and he thinks he's going to marry her. Um... That poor girl. And since when is being an immature douche a psychological disorder?!

I HAVE SO MANY PEOPLE TO DIAGNOSE!

This weird explanation didn't even make sense. It doesn't match up with the strange texts from night before. Or months before or when he proposed in March that I come over to his house to spoon while I was in town. How was he going to explain that visit to his live-in girlfriend?! Lord only knows who he's trying to convince because I don't even think he buys what he's selling. So, I laughed and rolled my eyes - because I've come to know his type - and ended the exchange with: Well anyways. Best of luck, kid.

So that's that story. Sort of hilarious. Oh Universe, you cockblock. That was an interesting, surprise prediction by the stars...and a throwback for the books. But it is becoming more and more clear that the universe is up to something and I’m growing increasingly curious as to what it is that it has in store. For the time being, I rather enjoy the musings…much to my own surprise.

*by shit my pants, I mean laugh and share the new knowledge to those aware of the story, which received this response: if i didn't actually know you, i don't think that i would believe that all those things could happen to you.