Struggling still to move beyond what it is I saw as so inevitably wrong and yet undeniably perfect.

The two sides fighting against one another to hope for understanding, and that move on a bench to subtract those three people in between – so again that chemistry may brush against mine. Wanting the same things but always waiting for the other person to make the move we wondered why “you” weren’t. Hurt by the silence waiting for the other person to talk – and the other shoe to drop. So silly that things so simple could have opened into a world so wonderful. So stupid to fear getting soaked that the flower never was watered. We now sit scorched.

“Fear is the heart of love.” Ben Gibbord, you fool!, stealing my wife, and yet so right.

My dad, a bit of a criminal and renegade salesman and my maternal grandfather, a top insurance salesman, I inherited the ability to talk about absolutely nothing for great lengths of time.
10 comments:

Owls: Cats of the Bird World 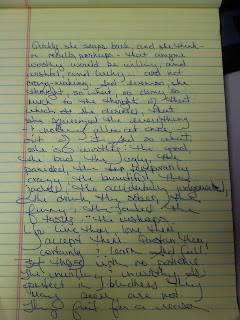 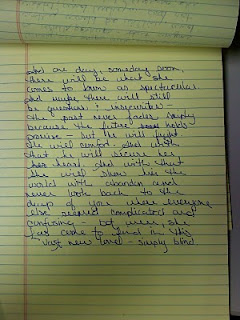 Quickly, she snaps back, and she thinks - or recalls, perhaps – that anyone worthy would be willing, and wishful, and lucky…and not crazy-making. And even so, she thought, so what!, so clung so much to the thought of that which she desired, that she squeezed the everything – and nothing at once – out of it. And so what!, she is worthy: The good, the bad, the ugly, the panicked, the temporarily insane, the beautiful, the jaded, the accidentally judgmental, the drunk, the sober, the funny, the failed, the tests and the mishaps. You live them; love them; accept them. Question them, certainly, and learn. And fall.

But those with no patience: The unwilling and unworthy. As perfect in blindness they may seem, are not. They fail for a reason. And one day, someday soon, there will be what she comes to know as spectacular. And maybe there will still be questions and insecurities – the past never fades simply because the future holds promise – but he will fight. He will comfort. And with that he will secure her heart. And with that she will show him the world with abandon and never look back to the days of yore where everyone else seemed complicated and confusing but were - she has come to find in this vast new love - simply. blind.

She listened to this.
6 comments:

G-Chat Snippet of the Day: On Yours Truely

B: was that FB comment too dirty?
me: haha. no.
i'm just bustin balls
it's what i do
B: yeah yeah
i know
me: are you also aware i show affection by picking on t hose i care about?
B: i have learned this.
me: you have?!
B: just like your affinity for cake
me: oh good.
i do like cake.
B: i know.
it's cake... what's not to love
me: when it's gone
Ben: fair point
me: aaaaaaaaaaaah thank you
B: i don't think some people realize your picking on them is a show of affection though
i think most just get upset
haha
me: ya. i realized this recently.
how did you figure it out?
B: just observing... i'm a good observer
me: evidently.
i like that about you, i just now decided.
haha.
me: impressed you picked up on that
like i didn't even notice till my natal chart pointed it out
11 comments: