10/08/12 - Evening: I just wrote myself a note on a post-it that was meant for something entirely different. 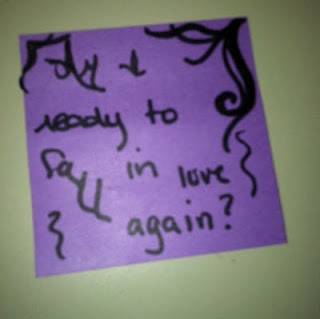 As I went to write an actual memo, listening to this song, I was suddenly smacked in the face with the thought: I’m ready to fall in love again. And then I went to write that and a question came out. I couldn't write it down for certain. It is still a question at the hands of my pen.

So then I stopped to ponder and wonder that maybe it was just the song – whose live version I find so gut-punchingly moving and I don’t know why. Or the movement of the stars towards something and out of life-lesson mode. Or the first chill of winter curling it's fingers and toes around the corner of this year. Or the fact that an old coworker - who was my fellow single something - came by today with his five month old (who isn't someone you imagine with babies) and my ovaries ached for a second. For the first three years we worked together, he went on about his singledom and how he may never get married and then one day he came back in the middle of winter and said he had spent time with a girl he knew from college...and I knew he would never be single again. Two years later and they’re married with a kid.

Life can go on for so long, so unchanging to the outside world of oneself, and then in a matter of seconds and then monumental months EVERYTHING is different. I am now at a point in my life where the idea of all of that change so suddenly scares the living daylights out of me. Or perhaps I have never been a big fan of change, but never took the time to notice before. Or, perhaps, I've never been quite so content, and scared that one rock in the wheel will shut down the system and I end up face down on the pavement with my Rollerblade wheels still spinning in the air. Or perhaps...I’m just a weenie.

Nor, apparently, can I decide if I am actually prepared for love again. It’s been so long now since last I fell in love. Fall 2004 was the last time. The last first time I said 'I love you' was in March of 2005. (College offers a timeline for everything when you think of life in semesters.) So we’re heading into eight years since the last time I fell into love. What if I forgot how to? And even if I wanted to end up face-in-the-pavement, ass-in-the-air in love, what about my life alone? What happens to that then? And why am I over-thinking this so much when I have been in love three times in my life and each of those I willingly stumbled into without a second thought? This is like seven thoughts and there isn't even a viable prospect in sight – only the idea that I may be willing again.

What has become of my heart? Has it been warped by the whiplash of the last five years? Is this a natural progression with age? Or perhaps it knows before my mind, that next time it could be real. Like really real. And I suppose that’s a scary concept – even at twenty nine.

How do I love more than just me now when I've learned to love myself so much? Are we allowed to admit those things? Self-love; I don’t know. But there it is - concerns and all.

I think the fact that you love yourself speaks volumes.

That said I don't think anyone is ever ready or prepared to fall in love- it just happens.