Last night, I was walking to my car after hot yoga and I ended up behind an older couple chatting, arms linked, and shuffling along the sidewalk­­ at a geriatric pace. My gait guaranteed I would catch up with them, but walking interlinked they were taking up the whole sidewalk and no one looks like a bigger prick than someone who pushes passed an adorable elderly couple, so I slowed down while I tried to figure out my maneuver. And then the old man began to fart.

Admittedly, I checked out backside, half expecting to see his trousers flapping like a flag in a hurricane. I was surprised when they weren't because the sounds coming out of there were like the ass blazing grand marshal of the one man toot parade walking down DC streets, feminine mascot in tow. Most surprisingly, he didn’t flinch; neither did she. They just kept on conversing like farting loud and long enough for the morning birds to hear was common and not at all funny. I, on the other hand, didn't have time to giggle as I quickly picked back up my speed and walked on the other side of the telephone pole to end up in front of the couple.

Once in a safe zone, I began to wonder: Is this what getting old is? Farting your way down city streets; or perhaps is the notion that things like that don’t matter - any and all fucks to give have been long lost, used or discarded. I look forward to the day my mouth is like his ass: Anything that comes out of it is fine; excusable and normal: I'll own it, the public can shove off, and my (hypothetical) husband will still hold my hand.

Being old is going to be awesome.

However, I have some time to wait; happily, at that. I have a long ways to go before flatulence isn't funny or even acknowledged.  So it bothers me that every time I scroll through my facebook feed; a list of peers that houses the ages of 25 to 35, that there’s always someone claiming: "I’m old", their refusal to acknowledge they're turning one year older, or "I feel old". We are in our prime and my friends; family; acquiescence; random-facebook-friend-I-can’t-remember-how-we-met, are all spouting this dumb shit about how old we are. And we aren’t at all "old"

If they're old, then I'm old. I don't need the reminder that I’m getting older; it's like listening to a clock click down to death. Just knock it off. Stop making me feel like it’s not a privilege to turn 31. And stop insinuating that 30-somethings are ancient when you are 26 and lamenting “God, I’m old”. We’re always older; I’m older now than I was the paragraph before this. So what. Our lives are ahead of us and much of it in good health (God willing) and that's fucking exciting. So what if you got a new number to say when people ask your age. Woo-hoo you made it that far without falling into a sidewalk grate! Or kid just started kindergarten. Way to go; you kept an entire human alive for five years! Or that you got excited for a new shower curtain. It's pink! The human condition is weird. I don't understand why we can't just be excited without deprecating age or accidentally telling a feed who might also be excited about something you think makes you "old", that they're "old" too. They're not; you're not: There are some really cool shower curtains out there.

Growing older is a privilege this generation treats like a monster under the bed. Only there are no monsters under the bed; there never were. And we’re not old; we’re older. And that’s something to be celebrated, not chastised. So until we’re propelling ourselves down the street with the air coming out of our asses, let’s ease up on the “old” talk, shall we?
12 comments:

Speculate and Chuckle: An Update

I have an update. Is it about my super duper I'm totally ahead of the curve because we officially get kicked out of our house in 59 days because they want to fix it up and sell it so I definitely have to move by then? No, because I'm so far behind the curve that I'm pretty sure I'm the first runner in the next wave. GUYS, WAIT FOR ME! I haven't applied to any but one job; I haven't even picked out a city, let alone coordinated my move, a place to live or anything else. I'm frantically waving my hands in the air behind the last of the pack while I battle tripping over my own feet and nearly falling on my face...

Speaking of waiting for me, my update is about the girl who left me at the airport. A couple of the girls who also went to Vegas apparently took it upon themselves to ask her what happened. On the one hand, I have to hand it to her, Ginger didn't try to offer any kind of she's innocent, I'm guilty spin. On the other hand, she outright refused to talk about it. What she would say, however, was that she did strand me at the airport at 11:30p when she knew that we carpooled and I was stuck without her (okay, I added that part for effect - albeit true effect), but she "didn't mean to". 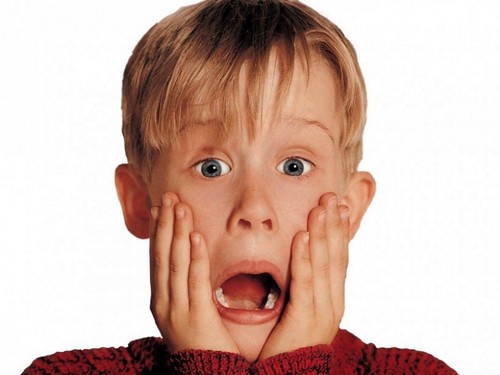 Go ahead and just blink silently at that for a little bit and then laugh, because that's exactly what I did. Baffled, we wondered just how on Earth you accidentally leave someone at the airport. And since she refused to talk and we're still not speaking, I was left to speculate and chuckle: Well gee I know when I got here and went to Vegas and slept in a bed that something was with me for the past five days but I just can't seem to put my finger on it now. (Or text the human when I realized that's what I forgot.) Totally viable excuse: I left the human but it's okay, I didn't mean to leave her there.

I just imagine her slapping her hands together in her defense, pleased with her silence and argument, and thinking to herself "welp, that oughtta do it". Now if you'll excuse me, I'm having a Kevin McCallister moment.
1 comment: