Some people tell me I complain about a lot. However, I prefer to call such things “observations”:

This year has been filled with many, many changes personally:
•    I became an aunt.
•    I became the last of unwed siblings.
•    I became single for the first time in 5 years (and out of school).
•    I grew my friends and independence.
•    I moved out of the District … and in with a stranger.
•    Both of my ferrets passed away ... in the same month.
•    I got a new nose.
To name a few: So this year has been a mix of good and bad, difficult and necessary – and with all these changes I find myself sitting here hoping, praying and half-planning for more. With all the change I feel like I should want to stay at the same job, in the same city to keep my new “normal” normal. But now I want to travel. I want to relocate. I want to try new things. Everything.

I recently realized that I have little adventure to speak of in life. I don’t have a passport; I’ve been to Toronto and the Bahamas. And while as kids we used to go to on little trips a lot: Pow-Wows, canoe/kayaks trips with my grandparents, camping in the fall. Once we went to a taxidermy convention (wherein I discovered how to realize if I smell pot when I got older: It took me about 8 times of saying “it smells like a taxidermy convention” with a retort of “It smells like pot” for me to realize that pot and formaldehyde smell oddly identical to me. To this day when I smell reefer, my initial thought is "taxidermy convention".). And one summer, when I was 13, we took a motorhome of 13 family members from western PA to our final destination of a re-enactment of Custer’s Last Stand in Montana, stopping at places like Wall Drug and Mt. Rushmore along the way. But that’s pretty much it.

As an adult, any adventures have all but ceased to exist. This year I went to California…for work…that’s about it. It’s sad. And I hate it, but I’ve been going to school and chasing debt for eight years. (Wow…8 years…) I’ve been preoccupied with trying to get out of debt, while going to school and digging in deeper. Now, I’ve been working for two years and I live cheap: I don’t go anywhere, no adventures – nothing - in a futile attempt to get out of debt. While, I managed to pay off my $8,000 credit card debt from college last year, I ended up with $5,000 card debt one year later. And still…no adventures, and it’s not for lack of invitations.  What stories will I have to tell my kids? Mommy went to bars and got drunk? Where is my epiphanal (yes, epiphanial) moment? Where are my adventures?

This is where my observations really begin to shine: I have been fiscally, socially and personally responsible my entire life. My most gutsy move was trading in my old Pontiac Sunbird and buying a brand new BMW M Series … just kidding… Mazda3. Woo! Livin’ large!!

[Tangent: Alright, so this year I bought a new nose too, but to be fair, I had to do it now or I knew I never would. And it was half-necessary and I had a payback plan that promptly went to shit when my boss called two days after the procedure to inform me of 12 days worth of unpaid furloughs coming up. And instead of being hella-cheap like I anticipated, moving to the asscloth of a state of Maryland, it ended up being more expensive than DC.]

So my point is…

I have been living responsibly for 26 years with little to show for it; I have two degrees, a car, and a new nose – none of which I own. (Exactly what happens if someone doesn’t pay back plastic surgery?) Each year I attempt to claw my way out of debt, but I always seem to end up back where I started. It is infuriating.

I kind of feel like I've done a lot and absolutely nothing all at the same time. And in the vein of “observations”, being close to six figures in the hole with no adventure(s) blows big donkey balls (that’s a technical term). And if I wait until I’m debt-free, or at least have more than $6 each month to live life, I’ll be 40…or 65…or probably dead. What happens when you waste you 20’s trying to be fiscally responsible instead of enjoying life and finding yourself? Your passion? Your happiness?

So, I’m taking this observation and I’m doing something about it: Welcome to The Year of Yes.

For 2010 (and basically starting right now), any request, opportunity, adventure that is asked of me or comes my way, I will say “yes” to. A little like “Yes Man”, but not quite as cheesy (and it's not where the idea come from).  So, if an opportunity arises and I’m capable, I will find a way to do it.

1. My credit card cannot exceed $5,000 (right now it’s at about 5,300, so there’s that).
2. My nose needs to be paid off my Oct. 1.
Those are my fiscal limitations. Other rules include:
3. Going on dates count, sexual advances do not. (Note: The Year of Yes is also the year of me - yup, I'm taking a year to be selfish - and men/dating is of little importance.)
4. Anything that is overtly dangerous is eliminated.
5. First come, first serve – unless one is cheaper than the other or vastly more appealing. Backing out is discouraged.
6. No taking (over-)advantage of the Year of Yes; life participants guilty of this are subject to “maybes”.
7. Bar invites are discretionary upon fiscal limitations; as all small requests may turn to something larger, but this is more about big adventures (and I still have some fiscal limitations).

This will be documented via WordPress blog aptly named "The Yes Year". Stay tuned and make suggestions in person or in my comments. Welcome to My Yes Year, the Year of "Yes".
6 comments:

Labels: life, self, year of yes

Earlier I was rearranging travel for my boss due to delays due to the pending "Thundersnow" in DC. My prediction? 4 to 6 inches, tops. I think it's too much hoopla; talk to me when there's three feet (like the blizzard of '93 where my sisters and I dug snow tunnels. Fun!) and I'll be interested.  I'm really only impressed with the "10 to 20 inches" (yea right) of "thundersnow" if it sounds like this:

Anywho, so there's that. So I work my magic to rearrange around the flight delays and get an email from AirTran with a "Fly vs No Fly" PDF attached. I have no clue what this is, so I open it out of my toddler-like curiosity to discover this (click to enlarge): 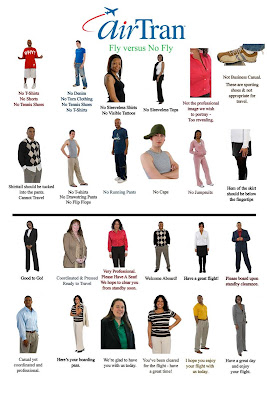 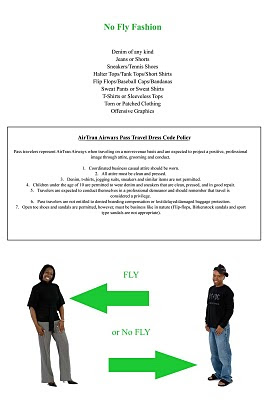 Really, AirTran? You're requiring a dress code for people to fly on your planes? This seems completely inappropriate and totally unnecessary. Evidently they don't want their passengers to be comfortable while flying. Are they trying to make themselves the high class airline? Sort of the wrong economy for that strategy, don't you think? Their marketing team should be fired. Also, it seems quite classist...no torn clothes? "Business casual" shoes? No sleeveless shirts or visible tattoos? And your little flyer there, slightly racist. I had more of a selection for what I could wear in high school.

Well, there goes that face tattoo I was planning on getting...

Now, more about this Thundercatsnow... 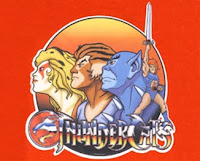 [Edit: The dress code is for AirTran friends and family - I stand by its rediculousness. And why did I receive it?]

There. We just had a simulated first date. What do you think?

Ya…me neither. Dating is stupid. And least favorite is an oxymoron.
3 comments:

There are a few sites that I have been finding amusing lately; I thought I'd share them with, just in case you have time to waste too:

(The Customer is) Not Always Right - Short cuts of customer interactions that make you want to slap your head and wish this existed when you waitressed or worked at the Gap. Oh, that was me.

Facebook Fails Putting on a show of all the dumb shit people say on facebook, just so we can laugh. All I have to say is: Moms on facebook = fail.

And for the holiday season: Sketchy Santas.
3 comments:

I have been technically single since March. I have been seriously single since the end of June. And have been living on my own since August 1, 2009. After 6 months of sleeping alone in a queen size bed I used to share with a 6'4", 230 pound man, last night was the first night I took to sleeping in the middle of the bed.

I mainly did it because two of my four pillows are dying and shared duty fixed it, but it was a strange revelation none-the-less. Evidently, I'm still adapting to my single life. And it's not always easy. The middle of the bed is lonely. And cold. (Granted I have my entire bed up along the wall that shares the other side with winter; and the first snow of the season was Saturday.) I may get good use out of my electric blanket this year; however, I already added another blanket between my sheet and comforter - it felt very Carrie Bradshaw on the episode where she talks about the first day of fall and adding that extra comforter for warmth and new seasons and beginnings and blah blah blah. But it was, it was the first time it was cold enough to need the extra layer and the first time in 5 years that I needed it because there was no warmth of a man beside me.

While my bed took me six months to wriggle towards the middle and away from the door side, my food making skills took a shorter amount in some ways and I'm still working on it in others. Grocery shopping for just me was an adjustment; I went twice before I realized: Oh wait, it's just me - I don't eat nearly as much as "us". I also went into financial panic mode in that time and learned to survive on $50 a month for food. This has lead to scrambled egg dinners, testing if 5 day old tuna helper is still safely edible (it is), pop-tarts for dinner and dessert and freezing a lot of things. I made chili - which is typical for me when football starts. It's cheap and delicious. I made a vat - it was probably about 3 gallons - I froze more than half, which is still in there. The other night I was hungry and got home late from work, a simple meal of noodles and sauce turned into about a half gallon of spaghetti sauce - half of which I froze, and the other half which turned into lunch and dinner for about four days. (Then I went home for thanksgiving and my mom tried to feed me spaghetti...that was quickly vetoed with explanation.) In short, things with effort are still made with the capacity to feed a family of 4...or an army of 100. Perhaps I should work on that.

Although, I still think one day I'll have kids, so finding a balance between being able to actually cook for one (which I still have trouble with) and eating single people meals (which also just happen to typically be super cheap) might be a good thing. So maybe I'm more on top of this than I think...I'll need to consult my 13 boxes of cereal and get back to you.