I left Chicago with a general goal of Cedar Rapids, Iowa. No particular reason, really, aside from it seemed a good midpoint between Chicago and my next destination of Minneapolis. In fact - full disclosure - I uploaded all of my previously written posts at a highway rest stop in Iowa who offered free WiFi. Which is to say this blog was set up and established adjacent to toilets (they were very specific about their hotspot).

I got to a town about an hour south of Cedar Rapids and decided I really needed to get a Verizon jetpack for wireless. Despite the surprisingly good service of Sprint's 3G in Iowa, I was becoming more and more aware that 1. I was heading into territory that Sprint would likely not cover and 2. I was very, very alone. After putting it off for about a month, I sucked it up and added $50 a month to my bills for the semi-security of an extremely limited amount of wireless data and was on my way to Cedar Rapids.

Using my camp app - and with the sun quickly setting to the left of me - I headed north in search of a campsite. As green as I am, I didn't occur to me that a campsite would be totally sold out. So after no spots appeared open at he first site, I had to drive another hour and hope for a spot at the second site. However, the first site armed me with the knowledge that campsites (in Iowa at least) post a board with envelops where you fill it out, put in your deposit, then take your receipt and tuck it in the post of the spot you claimed as yours. When I arrived at he second site there were plenty of spots open, but it took me about 20 minutes in the rain to figure out there green papers meant that the spot was reserved. I ended up pitching my tent next to the woods in the pitch black in spot number 13 - how lucky? It wasn't until the following morning when I woke up that I realized there were a slew of other camp spots 20 yards down the road - including tenting specific spots. Whoops.

It took me about 20 minutes to pitch my tent and another 10 to throw bags and my sleeping pad and blanket in there. The tent wasn't perfect but I DID THE THING!! IN THE DARK! IN THE RAIN! 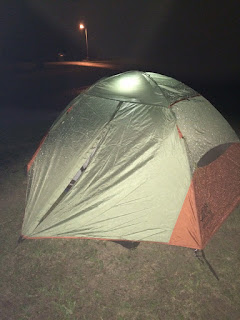 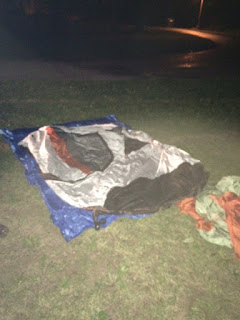 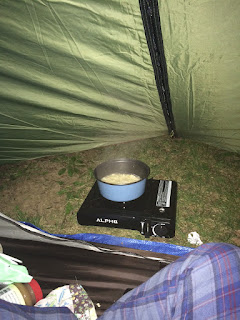 I also took my stove and mess kit and made some Ramen - still not feeling well - that I had bought earlier in the day at a Save a Lot in western Illinois. It's taking some getting used to being stared at like an alien with four heads. I mean, I've gotten some looks before based on my hair (probably) but this is another level.

I cooked my Ramen under my fly because I was too afraid of the animals screaming in the forest behind me. (It may have not been entirely safe, but I made sure the fly didn't get hot enough to melt so that's something.) It was also unfortunate timing to remember I'm mildly afraid of the dark. At 4am I had to face both fears when I woke up freezing and, after realizing I couldn't just ignore that it was 57 degrees outside, had to put on my headlamp and fetch my sleeping bag out of the car 40 feet away. From there, I slept like a baby.


When I awoke, I got to see where I had come to in the dark. It's an interesting thing to see where you landed once you can see you've come to. What a beautiful surprise... 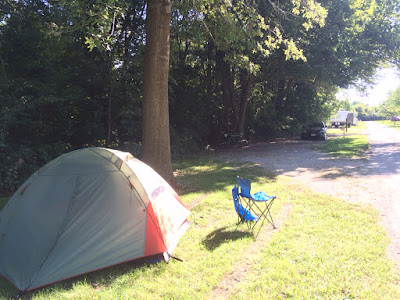 After a cup of tea and trying to reorganize my car for camping better, I took a shower. Lovely accommodations...although I can't complain much for $16 a night. 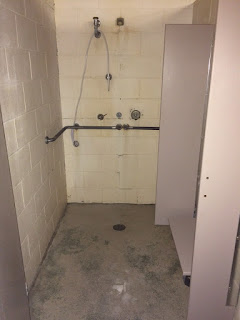 Here I learned my lesson of the day: Lavender soap beats sulfur water. After shower and a quick lunch, it was already 3pm and time to head for Minnesota. I'll be there for a few days with my cousin before I'm really on my own camping through September.