Day 13: A Couple of Dakotas


"[hopeful] Gas or Jesus? Gas or Jesus? [dumbfounded] Real Estate?! ... [feriously elated] Burger King! Fuck yea! ... [in awe] Oh. My. God. It's gorgeous." And welcome to an actual 30 second verbatim conversation I had with myself tonight while running near empty on gas and starving, seeing billboards for the first time in over 200 miles, and then noticing the changed landscape. Is this my life now?

Speaking of: Hello from inside my nylon house! (That Verizon Jetpack was a superb bullet to bite!) It's camp day three and I think I'm getting better at pitching this thing. It has been a bit frustrating getting over the hump of being totally green when it comes to this. And, full disclosure, I almost gave up and holed up in a sketchy hotel for the evening in BFE South Dakota tonight. This state isn't great about marking camp sites and tucks them pretty far away. After driving away from DQ (I hadn't eaten anything all day) with the drink atop my car and unable to find the site for the 3rd time, I checked the hotel for vacancy. She advised me that the sign for the campground is prior to the sign before the park. I went back again and somehow found it, unfortunately the registration was less than straightforward as well. Instead of putting money in an envelope, as I experienced in Iowa and North Dakota, they make you register online (or by phone) even for same day (moment?) reservations. Plus a $4 fee just to get into the park - so I lost a dollar stuffing a five in the envelope then another $8 for out of state fees. So there went $17 campsite - it's now $30. Par for the course, I suppose: It was a bit of an odd day, to say the least. 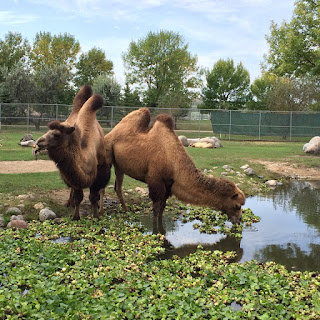 It started off across from a merky river that at night I assumed would be a beautiful lake - what with the abundance of lakes in Minnesota and Fargo being just over the state line. Not the case. And apparently flies really, really love that merky water. I couldn't get out of there fast enough after a lingering mosquito had the sharpest bite I've ever felt. I skipped breakfast, cleaned up - tried reorganizing my car yet again - and walked to the showers. I already have a short list of things I know I will look forward to having again once this trip is over. At the top of the list, perhaps, is being able to shower without having to press a little button every 30 seconds. (I mean, who can realistically shower in 30 seconds?! Yes, I timed it.)

With my mood soured by a poor night's sleep - in part thanks to the campsite being nestled under a busy interstate bridge - and the morning bugs, I decided to follow a sign for a zoo shortly after leaving the park for a pick-me-up. Red River Zoo was an adorable little gem nestled behind gas stations and fast food in what I'm guessing what a part of downtown Fargo. A couple of hours later I was on the road again until I saw a sign for the "World's Largest Buffalo". Well, duh. I stopped again.

There was a cute settlement of Jamestown along side the Buffalo and buffalo museum. I met a nice, middle-aged couple near the world's largest bison. They were from Indianapolis and just left Minneapolis that morning. They were following my trail - but at a much advanced speed. Heading to Yellowstone, they're likely in Montana by now but I dipped south on the advice of a man I met in a WalMart parking lot yesterday. Bill Butcher. (Hi, Bill.) An amateur photographer who warned me that after Bismark in North Dakota, there was nothing until the Teddy Roosevelt National Park and suggested I go to Wall Drug and Black Hills. I wanted to get to the Badlands (and Wall Drug again) so yes, this was my new plan. (Side note: Bill educated me as to why people in Iowa were looking at me like I had four heads and alien arms: Apparently wearing colors and tank tops in Iowa is scandalous. Well color me Scarlet!)

The sky was so beautiful when I arrived at the campsite tonight that I barely wanted to nestle into my tent. The stars so vibrant I swear I could reach out and touch them. I had been watching the skies flash in the distance while trying to find the site, but when I checked the weather and it was all clear. I, green and all, then assumed it was so special mid-west phenomenon. But now, I can hear the thunder; the rain drops are starting off slow, but fat. The wind is picking up - the rain intensifying as I type. I hope to stay dry tonight. Signing off in Mobridge, SD.

I really enjoyed your blog Thanks for sharing such an informative post.
mirror shadow