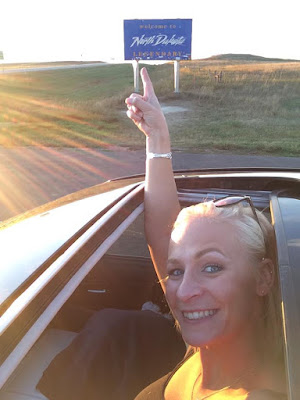 Every night I sleep with a different tool from my arsenal - tonight it's my flip knife. There's no real rhyme or reason which weapon is the protection of choice for the evening,  but, to be honest, I meant to sleep with my pepper spray tonight (as in, had it when I was throwing things in the tent for the evening) and now I can't find it. And that was only the choice  because I put my stun gun somewhere earlier today when I went to the coffee shop and I can't recall where (I don't like to carry my weapons in my pack with me, just in case they search or something). So, suffice to say, I suppose, that the nightly weapon is based on availability/locational knowledge. Living out of a hatchback has it's challenges.

I have tried to be very diligent about putting things back in their places so far: head lamp hangs from the rearview, lantern/flashlight clips to the net pocket that hangs between the seats, floor of passenger is the kitchen, toiletry bag behind driver's, etc. I realize that with such a small space and a bunch of stuff, I have to be careful  about staying organized or everything will be lost and nothing will be found. In turn, disorganization would likely increase my prep time for doing anything: cooking, showering, pitching my tent, etc. if I didn't keep everything in check. Tonight, this came in handy.

After a driving day - Black Hills, South Dakota to Bowman (75 miles south of T. Roosevelt National Park), North Dakota - I decided to treat myself to a bourbon, and, by chance, a chipwich, which I had been in lust of since St. Paul. (A quick note to acknowledging how effing nuts it is that the topography of land can change so drastically - green mountain forests to yellow flat grasslands - in just a couple of hours of driving.) I finally got in before I needed to use my headlamp to pitch my house for the night, so I made a quick run to the gas station for ice and ginger ale after the pitch. While there, I unknowingly dropped my wallet and, while doing my routine roundup of things when I exit and/or enter the car, realized my wallet was gone when I got back to the site.

I rushed back to the gas station, mulling over the idiotic oversight to leave every one of my credit cards, et al. in my wallet. Luckily, the guy parked next to me turned in my wallet and Viv, the lovely Kum & Go (that name is questionable) clerk turned it into police. Small town wonderful, the officer (pretty sure the only one on duty complete with North Dakota accent) drove back to the station to return it to me. (Most weird was that they still don't use area codes in this town. For whatever reason, to me, that is so bizarre.) That trio saved my hide and now I'm back in my tent, (foregoing the bourbon even though I dug it out of my hideaway space under the trunk) hunkered down for another cold night - only this time it's a balmy 45 - in another mom and pop campsite.

I've sort of deserted my camp site app and, for the second night in a row, settled into a place I found via road signs that's owned by whomever's house that is out front. The app is useful, but also a bit of a pain: Like when I tried to use it in Fargo and ended up at a fairground. They had it listed as campsite and fairground in the app, but - I've now surmised - that probably only means that it serves as a campground when there's a fair going. So, here we are in Bowman, ND ... in someone's back yard (wallet in tow, flip knife to the right).

I want you to thank for your time of this wonderful read !!! I definately enjoy every little bit of it and I have you bookmarked to check out new stuff of your blog a must read blog 먹튀검증

Thank you very much for this great post 메이저사이트

This is an extraordinary element for sharing this useful message. I am dazzled by the information you have on this blog. It causes me from multiple points of view. A debt of gratitude is in order for posting this once more. 먹튀검증

Easily, the article is actually the best topic on this registry related issue. I fit in with your conclusions and will eagerly look forward to your next updates. 토토사이트

메이저사이트 목록 You always come up with helpful and timely information. I will take this information and add your site to my list. Cheers!

온라인카지노사이트 You literally made my day happy by sharing this wonderful blog. Keep it up, thanks.

Thanks for the detailed information. It will take me a while to absorb this info but I am really happy to find your article online. 카지노사이트윈

It’s in reality a nice and useful piece of info. I am glad that
you shared this useful information with us. Please stay us up
to date like this. Thanks for sharing.

The subsequent time I learn a blog, I hope that it doesn't disappoint me as much as this one. I mean, I do know it was my choice to read, however I actually thought you'd have something interesting to say. All I hear is a bunch of whining about something that you possibly can repair if you happen to weren't too busy looking for attention.

Like!! I blog quite often and I genuinely thank you for your information. The article has truly peaked my interest.

I carry on listening to the news broadcast lecture about getting boundless online grant applications so I have been looking around for the most excellent site to get one. Could you advise me please, where could i acquire some?

I rushed back to the gas station, mulling over the idiotic oversight to leave every one of my credit cards, et al. in my wallet. Luckily, the guy parked next to me turned in my wallet and Viv, the lovely Kum & Go (that name is questionable) clerk turned it into police.
black and white suit salwar
black and white salwar