A Woman Wiser Once More

Obviously you can tell from my last post that the Turk and I fell in love and are obviously getting married and popping out some half Turkish, half blonde-haired, blue-eyed kids. So, then, what? Totally Turkish? Well that breaks rule Number One. So obviously he had to go.

Halloween ended up being the last time I would see him. He was supposed to come over the following day to finish what he started, but when he got done with work at 5pm, he said he was too tired (which makes sense considering he was snuggling with me until 5am for Lord knows why and gets up at 7am to work on Saturdays) and was going to go to sleep.

I got annoyed. He had already invited himself back into my life, which was dumb enough. Then he didn't respond to a text the night before until 3am when he picked us up. Then he invited himself into my bedroom to cuddle like all is good, which was even dumber. So I called him to call him out after he canceled via text and after chatting 10 minutes, he said, "I just parked. Let me call you back when I get in my house."

"Okay," I replied and hung-up.  Instead, 5 minutes later, this happened: 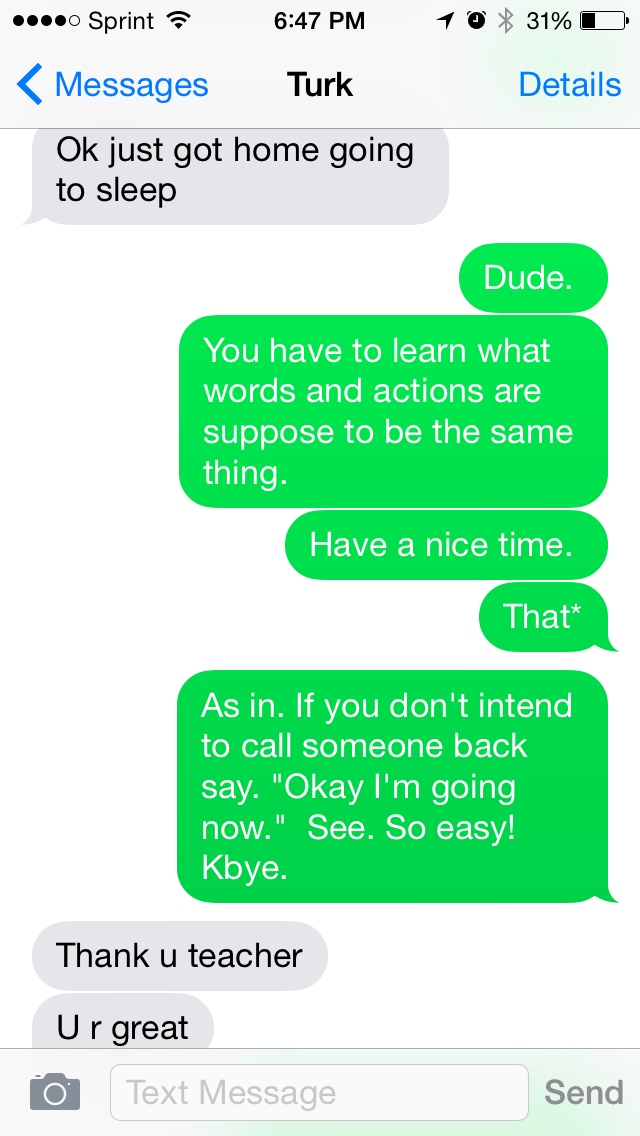 And that, I would later realize, is my version of a 'fuck you'. I'm done playing nice. Don't like me because I don't care any more. I'm over it.

A few days later he texted me a simple 'hello.' I responded with a 'hello' back. A few moments later I got a voice mail notification. Earlier in the day I was talking to my sister, she tried to call and then texted it was going straight to voice mail. (Sprint sucks.) So just as I was ringing him back, I got a text notification saying "sorry, my ass dialed you." (I immediately hung up; he never got my call back.)

Now on what fucking planet am I suppose to believe that it was his butt that dialed just after texting me?! Especially considering that was his process since we met: text to see if I'm by my phone, then call. So, naturally, I timed it from my work phone - the time between the first hello, what's up and receiving the voicemail - and there's no way it was a mistake. That bitch was covering his ass because the girl he hoped to rope back in refused his call - so he thought. Since then, I haven't heard from him, which is good, because there are four things I have learned from this experience:

1. Never date a man with a bidet (or toy dog). Once I see it, all I can picture is him hovering over his toilet getting a squirt of water in his bum. And he had each toilet in his condo equip with enormous ad-on bidet contraptions which made it all the more awful and hilarious. This also means that the guy is probably pretty high maintenance - which falls in line with his having a toy poodle. (As if I didn't learn enough from the four fucking chihuahuas that first time.) So, ya, no bidets (or toy dogs).

2. I would rather have a poor man's time than a rich man's money. I'm not interested in a man that works 12 hour days six days a week to surround himself with things and stuff. I want adventure and love and togetherness. Fuck the Mercedes and fancy dinners at nice restaurants; sure they're nice, but I would much rather cuddle to Saturday morning cartoons. Some gals value material things and show (and that's fine for them), but this has made me realize where my priorities stand.

3. Trust your subconscious. In a moment of full disclosure, this thing didn't just end with a dream, it began with one too. The Wednesday night of our second date, he slept over. Shortly after falling asleep, I awoke to my own screaming. "NOOOO!" as he shook me awake, concerned. I never wake up screaming from nightmares; I rarely have nightmares. He asked if it was about him. I lied and said it wasn't. What my subconscious realized long before I did was that, to him, my opinion was optional.

4. Red flags are red flags...(no matter how sweet the presentation of the man carrying the torch of waving scarlet fabric) and time and space will fully illuminate them like a spotlight in the dark of a once romantically-lit room. They become visible only when we are no longer blinded by a person's intoxicating presence and the incredible, exciting darkness of the promise of what 'could be'.

Because there was good there. There was. The words he said, "I don't care what we do, as long as I am with you." The attraction. The way he made me feel. Those moments of absolute fucking entangled perfection. My heart's content. And that connection I swear to LBJ wasn't just in my head. The feeling of just missing someone again. And the fucking psychic predicting exactly him. But there was also bad; those whistling red flags.

I've learned all relationships are the weight of what's good of a person versus what is bad. That's what defines if a partnership will work: that the good outweighs the bad. I refused to commit because I hadn't yet navigated the bad; weighed it out. Then the time away took from him, his ability to 'look' at me that way that had me entranced; it magnified all of the things that made me resist him from the start. The mother fucking control, reminiscent of my tight-shipped step-childhood. The way he reminded me of the false-Casanova my dad pretended to be. Like the time my dad was talking to a girl and said, "I love you," to end the conversation and when he hung up, bitched about how stupid she was, and when we asked him why he said he loved her responded, "They're just words." At a very young age, my sisters and I learned he would say - to his many women - what he thought a woman wanted to hear. To falsely feed into their feminine desires to satiate his ego and lie to cover what he thought they shouldn't know. And we bore witness all of our lives. Early on, I began to wonder if I was living that same lie.

But the moment that sparked the end for me - the final high flying, Mario at the end of the level red flag - came a week into the Turk being gone. And in one of the first times we got to talk in a week, he asked for photos of my ass. When I declined because I was with family and also just 'no', he insisted and I got pissed. That night I declared, "Well, if nothing else comes of this, at least I got these sweet socks." The room full of people laughed (as I showcased the epic socks he said his grandmother made), but deep down I kind of knew then where everything was going. He wasn't who he had pretended to be. He wasn't my Casanova, even though I wished he were. And when he had told me that first week that if I "gained 10 pounds, we were just friends" he wasn't fucking kidding. He also wasn't kidding when he said I could "get bug bites, but no bruises". In his absence, he didn't have the balance of charisma to fix how fucking pissed off I was becoming - like when he told me my lipstick was "tacky" but with such a charming smile I simply told him to piss off and moved on.  Or how disrespected I felt when he told me to excuse myself from my family to take a photo of my bum for his enjoyment - all while counting down the battery on his phone, like you better fucking hurry. He couldn't be there charm me; to kiss it all better; to stop me from ruining it irrevocably because I refused to be unheard or controlled or disrespected with countdowns and bullshit.

The spotlight had been cast.

Nonetheless and still a girl in want, I spent the month both trying to save 'us' and continually pushing him the fuck away from me. I was fighting with this thing I wanted so much with my heart and the logic of what I knew was a terrible mistake. A mistake whose lightness only shown through with the clarity of time and space. A tumultuous argument that leaves you yelling at the blank space of what was because the thing you've so revered to both love and hate, you cannot even communicate with. It was a miserable place to be, both in lust and disdain; incredible want and a growing resentment - and with the absence of its protagonist, unable to resolve it.

I held onto the hope that maybe, just maybe, it would all work out because I wanted to feel that way again. It was intoxicating. And he did come back for just that second long enough for me to realize it was still a bunch of bullshit. Still, I mourned the chance to feel the way again because, really, how often does it come along and how often does someone look at you like you're a fucking drug; treat you like their life's purpose? But addicts are fickle and false and tricky. And oh so bad for you.

It has taken me until now to realize this is how abusive relationships start: You are so charmed that you don't even notice all the ways they try to change you; control you. And claim you as "my property." And that's not to say that's what he was doing; honestly I'm not even sure he really knows what he's doing. But I've come to realize just how fucked up I could have become had it let myself fall in love with him; with the idea of the wonderful things he was selling - and have altered myself [edit: see #3] to be with him like he wanted; to keep him happy. But even still, I wonder: How much of it was real? I think, on some level, he did have feelings. But I also think, on some greater level, he simply wanted a trophy - a beautiful thing. And I want to be am so much more than just a beautiful thing.

As is the nature of entanglements, I wish it could have been perfect. I wish it may have been more than just a few months and four lessons. But it wasn't. It wasn't my time; my turn. I had have more to learn. My turn still lays ahead of me, as a woman wiser once more.