A Large Part of the Human Condition

Well we might as well follow this soap opera through since we've brought it step-by-step this far...

So there I was on Friday, I had just been coaxed into going out for Halloween, via text, while out to lunch with coworkers. I had a last minute costume all figured out - since it was last years original until the skirt I bought from Japan was too small and I turned into Sandra Dee instead. I was going as a pin-up. Or something close enough - who cares, I wasn't planning on going out anyway.

On my drive back to work, I get a text from the Turk. A brief exchange follows: 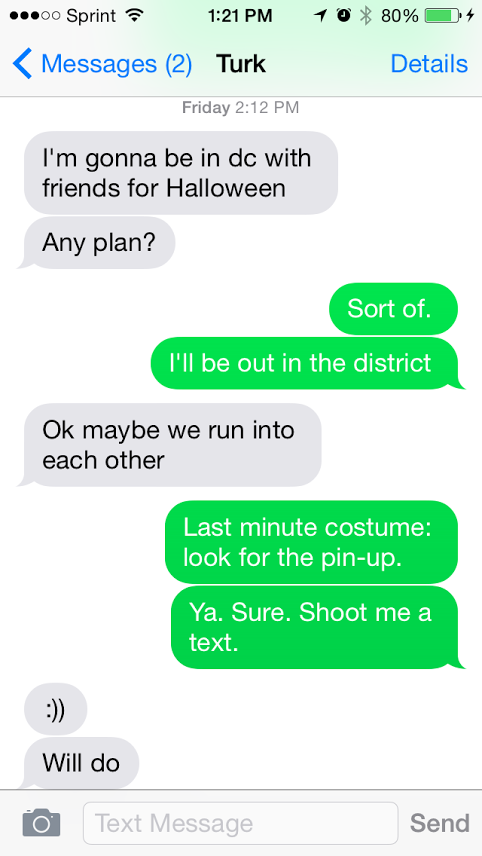 So the night begins. He texts me his location around 11p. My girlfriends and I are at a house party on the other side of town, but we want to go dance. The area he is in is my new favorite and my current place to dance since my old roommates E and M went to a Body Language concert in September and then got to this bar/club early enough after the early concert to have the whole floor to ourselves and wriggle like no one else existed. (Those are my favorite kind of nights.)

I response to his text, I told him I could text when we left the house party if he wanted. When we got to the bar near him, I told him where we had ended up, which was a couple of blocks from where he was. I think he thought I was going to be alone and meeting him, because his only response to the where we were and you can meet us text was, "Us?"

After an hour and a half, at 2 am, with no further response from him after explaining the 'us', I texted back, "Cool. Thanks." And I was ready to leave since it was way too packed to dance and I was irritated after I had gotten dead air from this dickhead again. My girlfriends, however, were not. So at 3am, the bar was closing and we were being kicked out (thank God) and on our way to pray to the LBJ that we could catch a cab (since the metro closed at 3). Walking down the steps, at 3:04am, I get a call from the Turk who asks where I am and, when I say leaving the bar, he asks which, where, and that he'd be there to pick us up. FANTASTIC! Whew. Free ride and not dealing with the lack of cabs and Ubers on Halloween!

And then, midway through the taxi-bration, my brain went "what the fuck", which was quickly pushed aside while we entertained ourselves on the sidewalk and did things like take pictures with strangers and fruit. 20 minutes later, he pulled up with the same friend that he had made get a hotel the night we met so he could go home with me: Apparently he always drives his friend in his friend's car when they go out clubbing. Getting into the car wasn't quite as bizarre as maybe now I think it should have been. But you know what was bizarre in the moment? That he kept putting his hand behind his seat - I was seated directly behind him - to try to hold my hand; rather get me to hold his hand. I flicked it and high-fived it instead. Very mature. He turned sideways in his seat so he could see me when traffic was crawling or stopped. He looked at me that weird, adoring way again. And all I could think was: WHAT THE FUCK IS THIS.

We drop off my two girlfriends at their place and the two Turks drove me onto mine. The Turk's friend asks if we were going to go to the diner we went to before: The one we at at until 5am the night before the Turk left for Turkey. That place, I later was told, where I was teaching a girl at another table to do yoga and the Turk looked on amused. See, I'm fucking funny.

Both the Turk and I said we weren't going to the diner. One, I wasn't hungry and two, it was 4am and I wasn't particularly drunk. Tispy for sure, but not drunk enough for waffles at 4am dressed as a pin-up - and especially not with this guy that gave me the shove off a month ago and is now trying to hold my hand like nothing bad happened. As a concession, the other Turk said he wanted coffee so I invited him in for a cup. I made him his coffee then went to my room to change out of my costume. The friend headed to the living room to drink is brew and the Turk followed me into my room.

He sat on my bed and pulled me toward him. To cuddle. Not to kiss. Not to bang. He wanted to fucking cuddle. WHAT THE BLOOD CURLING SCREAM OF A FUCK.

To be honest, though, it was nice to be wanted, to feel as though I wasn't crazy enough not to be missed, to have that body and warmth and spoon. Was it him? I wondered, or was it that anyone would have been nice? But that didn't matter, it was him there: It was this guy that jerked me around, who gave me a shit send off. Who I mulled over until I realized he didn't matter in my life and if he drove off that road, good riddance to him. I asked if he missed me and he refused to say anything; he said he wouldn't answer that question. A few moments later I asked, "What are you doing here?" while we lay intertwined on my bed.

"I wanted to make sure you got home safe."

"Well, I'm home," I said matter-of-factly, as he looked at me quizzically. "So what are you doing here?"

"Are you kicking me out," he asked.

"No," I said, "But I want to know what you are doing here." I can't even remember the response, so suffice to say it was nothing worth remembering. More time passed, mostly in silence or general chatter. He smelled me; I could hear and feel him smell me...You smell me?!

Laying against each other at the edge of the bed, he looked into my eyes and we said nothing. And after about a half an hour alone, I kissed him with hesitance and lustful necessity; smashing my red lipstick all over his mouth, pulling away with a giggle as I saw this man - who wants to always be so in control - painted with a crimson lust. I wiped it from his face as I declared, quite confidently,"You missed me."

"I'm not going to say anything," was his response - or something like it.

"What do you think," he said in that way that suggests you're stupid for thinking otherwise.

"Did you miss me?" he responded.

"No," I said, "I hated you." A hyperbole, I realized, but I hated the moments and ridiculous situation(s) he put me in well enough. I hated thinking about him. I hate that he ditched me. I hate that he tried to force something I wasn't ready for. I hated that he was back and I let him be back. And that I didn't hate him. In fact, I almost liked him there.

To which he retorted, "Well that's good! If you didn't hate, you were indifferent. If you hated me, then you had feelings." Oh yea, good, that's great, Captain Mindfuck!

Moments passed as we lay there together - listening to his friend rustle about in the living room while giving us our time alone. It was nearly 5am. I was sitting up when he asked about a trinket he had bought for me and hung on my wall during the first week we were dating. A trinket he couldn't possibly see from the position he had been in for 20 minutes, which means he noted it when he walked into the room. I asked him to repeat himself - one, because facing the opposite way it didn't make sense so I wasn't sure what I heard and two, to gauge the kind of reaction he would have from saying something as vulnerable as 'I noticed you removed me from your life'.

He wouldn't repeat it. So I went on talking about the trinket and that I took it down - however, I didn't throw it away. (I can never bring myself to throw gifts from exes away. Whoops.) The trinket missing from the wall lead into another discussion about what the fuck he was doing there because "Why the do you care if I got rid of something you gave me". And why he was back and he's the one that actively went away. AND WHY ARE YOU FUCKING WITH MY EMOTIONS I DO NOT DESERVE THIS I JUST GOT OVER YOU AND DIDN'T CARE AT ALL GO AWAY PLEASE NOW WTF, ETC, ETC. Except that last part was just in my head, instead I said, "You're the one that stopped talking to me, remember? And I understand hooking up, but you're clearly not here to hook up, so WHAT ARE YOU DOING HERE."

And, as if my dream was a foreshadow of the nearly the exact events to come the following days, he said, "I don't want to do this. I don't want to talk about this."

"Neither do I. You're the one that brought it up," I said as I laid back down on his chest - like that was a good fucking idea. Just as good as the the fucking idea I had a few minutes later, that was barely worth the effort, but really was my entire goal the whole night - so I can't kick myself. Although, I got from it a ridiculous story from the tryst -- that I just HAVE to save for the book - as well as the shit realization that the feelings for him I discarded were merely buried just beneath the surface, all while I thought I'd snuffed them out entirely with logic and time.

Damn you, heart. Damn you, boys. Damn this shit; these games. I just want to shut the door in his face (which I haven't ruled out yet), but I am reluctant to ever leave something open to ever asking, "what if". They haunt me, the 'what if's', and likely not for my greater good. And they continue trample me in the aftermath of 'I only know its a mistake if I make the mistake'. That sounds like a large part of the human condition. And I suppose we all have to suffer.