Yesterday morning I woke up remembering a very vivid late morning dream. It was about the Turk. A surprise topic since I really hadn't been thinking much about that situation since ya'll watched me process it through two weeks ago. (I never did send that email.) But the dream was hilarious and fantastic and I took it to mean I was feeling quite myself again. It went as such:

We were apparently living in the same building. He had just returned from Turkey and I saw him enter with his bags while I doing laundry in the common area. He left a partially scratched lotto ticket on my chest freezer - which was behind the washer in the common area. I pretended not to see him as I passed, but bumped into him while heading back to my room so I'd know he saw me; I noticed he had the purple lotto ticket. I went to my room briefly and when I went back to the freezer, the ticket was still there. (The number scratched was 10 and three horizontal lines to the left of it.) So I walked over to him - while he was crouched down riffling through his bags - to give it back and he shut the door in my face. So I put my foot in the door and he was like, "I don't want to do this."

I said, "Do what? Here's your ticket you left it on my freezer." He said it wasn't his and I said I saw him with it. He took it and then he went on about how he didn't want to fight. And I was totally calm going, "Um. I don't want to fight with you." He said we weren't going to get back together - and while he said that, his toupee* fell off the back of his head and he just put his hand out in front of himself and caught it and put it back on and didn't acknowledge it happened; just kept talking. Then I just lost it cracking up laughing and said "I definitely don't want to get back together with you, but we live in the same building so we should at least be friendly."

*no, he doesn't wear a toupee IRL

And then this happened yesterday evening:

Here was the awkward 200 year old sea turtle of a conversation that followed: 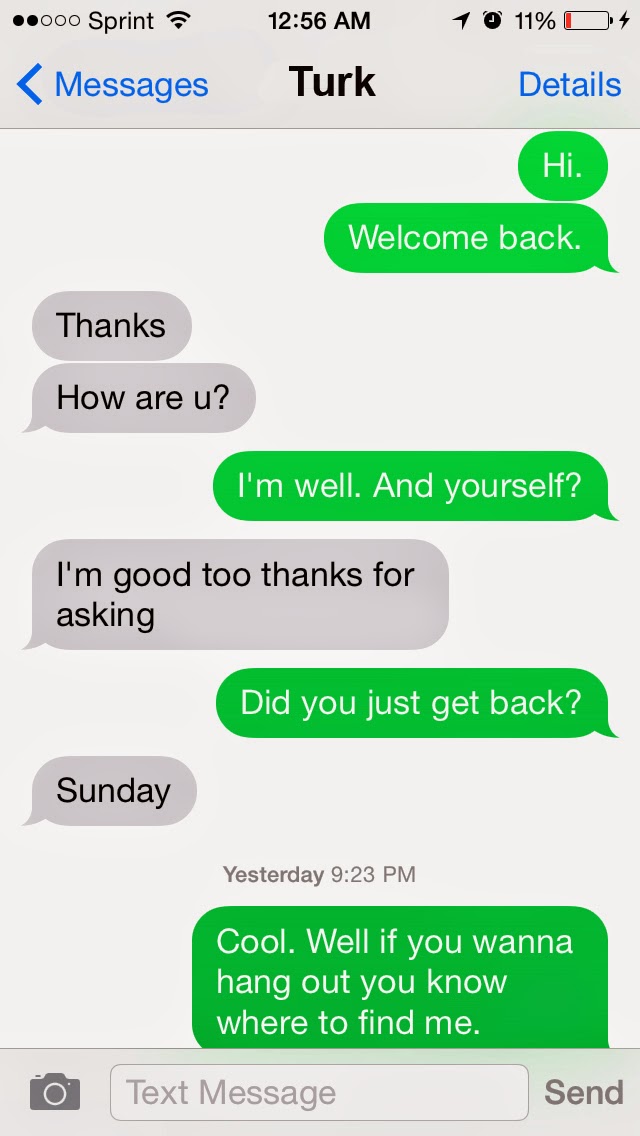 But what I really wanted to say was "What do you want?" Like "Um, excuse me, what the fuck are you doing? What is this right here?" as I tap on the screen. Didn't we do this already and you gave me the shove off and we couldn't agree on the fact that I don't commit that quickly and you wanted to force me into exclusivity? And that whole I'm in Turkey and move on without me part. Seriously, what do you want? Because I am not at all prepared to deal with this shit all over again. Let us not play games.

This happens time and again - and I'm not sure how often it happens to me versus what is considered normal - if there is such thing as normal - but I am the girl that 1. friends fall for and 2. exes come back to. Why?! 1. We're friends; don't ruin that. And 2. we've been there already and it hurt. Granted, this situation as been slightly different than normal completely ridiculous from the start, but I moved past that part of giving a shit and wanting to be with him and why would I want to go through that again. And then, as a total human, I also want that chance for anyone who saw me misrepresented, to see who I really am versus that fucked of version of ovarian cysts and scared and resisting girl. Also - let's be honest here - physical attraction and adult needs...knoamsayin?.

This is an incredibly shit catch-22, but I suppose that's just following due course of a situation that has been as incredibly fucked up as this since day one. And no, for those playing the home version, he hasn't responded and I'm leaving it at that. I felt as though it ended the game and absolves me from any further thought or action. If he was giving me the heads up that he's back because he thought I cared, I didn't - and that can lie there forever as an end because I don't need upper-hand power and, as far as I'm concerned, my cute, conveniently-timed dreaming, toupee-inventing brain says I have it anyway. And if he was testing the waters to see if I'm still interested in him or if I am dating someone else, I think I answered that question in a pseudo-invitation to invite me to hang out. And bravo to me, I think, for that clever and slightly low hanging fruit of 'let's not play this game' because it is clear to me now that I don't understand men, but here I feel as though perhaps I'm learning to deal with them better.