It was GFN’s birthday party last Saturday. We had a table with bottle service and many, many bottles. I had spent eight hours at the dealership that day buying a new (used) car in prep for my cross country move. After a quick shower, a Lean Pocket, I was out the door and on my way: A striped crop top and a knee-length asymmetrical blue skirt with matching striped shoes. Cute, yet tasteful. I didn’t even get up the metro escalator before a man was hitting on me while I was on the phone. To get rid of him I spouted off my digits when he didn’t even ask and instead said “give me your number” WHILE I'M ON THE PHONE. Seriously dude, take a hint. Three days and two un-responded to text messages later, I receive a dick pic from escalator dude with a pack of Ritz crackers for scale and the message: “Okay  you’re clearly not into me…do you think an other girl would find me attractive?” I was tempted to text back “nope” or tell him some girl had given him a hoax number and I was a church clergyman, but I just left it go and did my best to laugh it off.

But seriously dudes, NO. No, no, no. Bad. And probably illegal.

What’s funny is that this text came just moments after I had told my cousin that I’m happy single; I enjoy dating now, thinking earlier in the week how much better it is at 30 than 25. Then my phone buzzes, I see a penis next to a pack of Ritz crackers and immediately voice, “Maybe it’s time I rethink that”. And this conversation only started because of the Turk. So let’s go back to the bottle service...

Lean Pocket in my belly and with every intention just to wriggle my butt all night to celebrate a birthday, I arrived at the club. The hours pass with much merriment. Some people left; some of us stay. It’s about 2am and I’m spinning and drinking my pink champagne when a man at a table across from ours that I now just happen to be dancing in front of tells me he likes my dress. I correct them that it’s a skirt. “I like your outfit.”

"Thank you," and I excuse myself to fill up my glass and come back as promised and we continued to talk. I learn he is from Turkey, he just turned 30, he doesn’t drink, but he likes to dance so that’s why his birthday was being celebrated there. Through his accent and the haze of blasting music, I can’t understand him so I pull out my phone to type what I’m saying: This I only learned last night and today when he told me and then came across our conversation in the notes. I was clearly sober. (Psych. Although he thought I was - go go gadget auto pilot!) 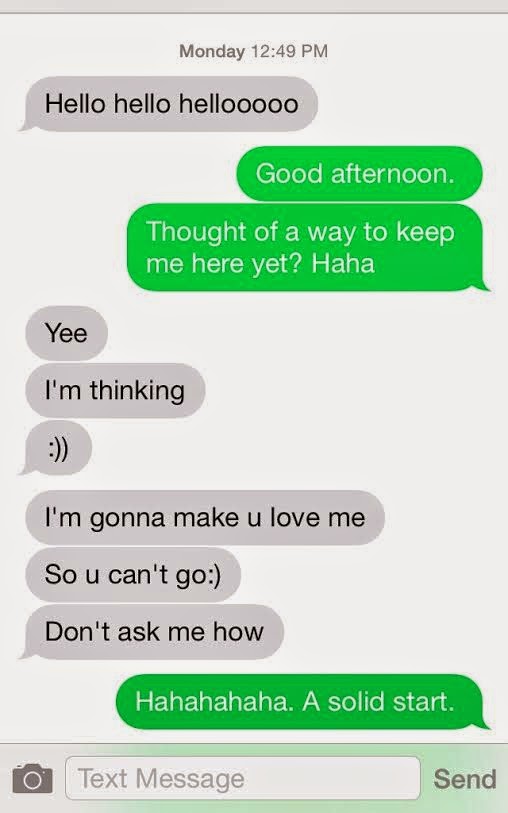 He woke up in my bed Sunday. I wake up and actually remember there was a guy in my bed before I saw him this time. (Progress! haha) He had to pick up his friend at one, whom he made get a hotel room because his friend was drunk and the Turk was using his car to take me home. He tried to take me to breakfast but I declined because I was going to lunch at 12:30p. So we went to grab Starbucks and while in line, lunch fell through. So I told him and he exclaims “We could have gone to breakfast! … Well I’ll come back and take you to lunch.”

I didn't really take him seriously, but that’s exactly what he did. And then for ice cream..nom nom. And we spent the day together until 11pm when he went home. During this time together he revealed that he’s going home to Istanbul the 24th for a month and I said “I might not be here when you get back.” He was taken aback when I said I planned to move to Seattle and declared that he would figure out a way to keep me from moving. The following afternoon I asked if he had a plan yet; apparently he's going to make me love him so I can't go...

He called me again Monday night to say goodnight. A short call; okay. And last night we spent 90 minutes on the phone; a huge deal for me; someone who “hates” talking on the phone. Serious subjects matter too, like he'd like if if just he and I could date. That’s sort of a problem for the three bottle of wine guy I have a date with on Friday (oh, I need to tell you guys about that one…) but I kept that to myself. This is all so weird. So fucking weird.

And then my mom chimes in “I had a gut intuition that you would meet someone in late summer who would keep you from moving on the schedule you wanted.” Okay, mom. Okay pipe down, everyone. This is so bizarre. But I have to go – he’s coming over tonight. He wanted me to make him dinner but when I said I wasn’t going to put a candle he told me to save cooking for when it was “special”. I don’t know what’s going on. But, you know, someone calling you a drug isn’t as weird as it sounds. It’s sort of endearing. And infinitely better than a pack of Ritz crackers.