Looming over me – or rather my blog – has been this entry right here. I haven’t written because I wanted to get down what a bunch of psychics said before I moved on with what’s been happening, which is another reason entirely why I’ve been so scant with my writing: A lot has been happening. What the hell happened to just being bored?!

So this is the part where I pen down shit so I can see where it goes...

Back on February 17, GFC and I went to a psychic fair. They offer 15 minute readings from a handful of people and varying skills for a huge discount. I had four readings: A Reiki master named Valerie, a tarot/numerologist named Larry, a lipologist/handwriting analyst, and guidance intuitive. The latter of which I misunderstood and didn't care for – she’s actually supposed to give you guidance with questions you have. I prefer to sit down and let them read. So let’s just skip over that one. From written notes (even if some of these seem nonsensical, I’m leaving them, as in the future it may make sense):

Valerie: Even sinuses; flowers and spring bother them. Not afraid to say what I think. A heavy heart; whiplash in romance: I must let it go. Sturdy knees: Lots of support from people here and family who have passed. I have determination on the path that I’m on; like a balance beam moving forward with determination. Exiting a path: Opening to a row of houses (real estate?).

Larry: High priestess (card): People came to me for advice in a past life and it carried over into my current life. People come to me for advice, but be careful of “energy vampires”, especially those who are not aware that they are doing it. Life number is 2: Very rare life number. Year number is 5: 5 is variety: I’m independent and have a busy life. The person that I end up with has to understand that. They have to be a partner that contributes – monetarily and otherwise. They have to understand that I need time away to do my own thing and can’t constrict me. Of 2013, ended up with number 2: To him this represents relationships: One of the future and one from my past who has yet to come to pass (again). The past guy comes back first, but should be left there: It’s up to me if I leave the past there, but advises I should let it be. The future guy hasn’t been met yet: He saw me shaking his hand. I will meet this guy in the 2013 calendar yet. Tarots: I have enough money in this life but not a ton; if I do I am very generous with it. I need a partner who is equal and would contribute monetarily. 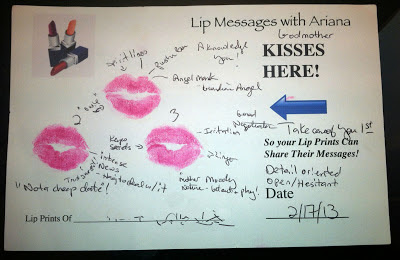 And then we went to another fair at the same place on April 14th, with (mostly) new readers. Louise, a clairvoyant/tarot reader who has worked with the DoD as a remote viewer, Larry (again), Mike, an intuitive and Allyson, a psychic medium who is mildly famous.

Louise Dellafiora: I am intuitive. June – August there will be money coming in (July = money). March/April, 2014, I will be making money off of my creativity; success: There is money in writing for me. I need to write. There is (good) karma in DC for me and I should not move yet; I will move next summer. In August 2013 I will find my love – right now I’m not ready for a it yet. The angels will bring him to me through a female friend. Next year I will make a big purchase. I will have a job change around July-October of this year. The Arch Angel Raphael is protecting me. I have two females (friends) around me supporting me. I have an old soul and was born with wisdom. I have a strong body and health. Everything is in divine order.

Larry: Lifepath 2. High Priestess. I must live for me. My energy is out in the world versus person. The right relationship: balance, independence, reliant spirit. In year 7. Start of 22 year cycle: The Chariot – move forward, okay to be cautious; don’t be reckless. Fool child: Travel card: Trip of day to take person from comfort zone. Run towards something, not away. If I run away, it ends up not ideal. 10 of Swords: Putting off decision to not be stuck. It is better to be waiting than stuck. I will be starting over in the future. 9 of Pentacles: relaxed and comfortable in life; it’s up to me to if I end up with another person. Right now, relax, enjoy life. The universe will bring change. 30 is a strength year.

Mike Brazell: [He started by having him place my hands below his; you could feel the energy move through our hands] I can handle chaos well. I work well in controlled chaos: I move through it, but focus and fixate on little things. (And stop it) I have strong intuition; I can see through things immediately; I zero in on them (the truth). I am an experiential person. And I can help people. [It is at this point he asked if I were creative; I said nothing, he went on you paint, or draw…or write. He paused. “You write.”] I need to write because I have a story to tell. He told me I need to write a book and was very adamant about it. He said once I write it a publisher will come along; he didn’t see me having to self-publish. He said it will be popular and would become a series [to which responded OMG THAT’S THE IDEA!]. But he [also] knew I wasn’t writing. He said it was because of fear – what fear he didn’t know, but that I needed to get past it and start writing because it would be successful and people needed to hear the story I had to tell. It would help them. He offered advice on how to write it and keep going and get it done [no fear, stop writing it on a screen and write it on paper and was so focused on this book that it took up 30 minutes of a 15 minute session].

Allyson Walsh: As soon as I walked in and sat down she said “OH MY GOSH! We could switch places and you could read me!” She said I am extremely intuitive; I am clairvoyant and clairsentient; I just know things. These abilities are in my family. [We briefly chatted about it and I admitted that, yes, things like that have been discussed in passing but not with my grandmother because as my mom would later reveal she’s told my mom a thing or two but nothing beyond that because she doesn’t want anyone to think she’s “crazy”.] She said that there’s a “Mar” name in the family and she had it too – she watches over me. [I said there was no one with a named starting 'Mar'. She was certain though and told me to look into it. Afterwards I talked to my mom and she looked back and found out my grandmother’s grandmother was a Mary.] She said asked if I used to see things. My “abilities” will get stronger as I get old; don’t ignore them because they’re not going away. By the time I’m 38, I’ll start to hear things.

Right now I’m not ready for love/relationship. She said my husband/love will come in 2014. When I advised her that many other psychics said 2013, she was unrelenting on the year, but she conceded that maybe we may meet in 2013 but it won't really get going until 2014. When we meet I’m very stand-offish [she used body language that I would completely use – and in retrospect, have before - were I telling a story of a guy needing to pump the breaks]. I’m guarded a bit, but he is very into me even though I’m not so sure about him. I warm up to the idea. He can dance – like club dance, not ballroom. “He can move,” she said. The engagement will be quick (3-6 months), “barely enough to consider it an engagement”. My wedding will not be a typical church wedding. It will be a destination wedding. Very relaxed. [And I was like Oh! I want to rent out a beach house and have it in the backyard. Like a potluck BBQ. She was like "Yes, that". I mean, of course she was, but that's in impressive pull.] She ended telling me she saw me going to LAX – there is a Hilton hotel there she got a vision of just before she let me go.

Whew. Okay. We may now continue with our regularly scheduled programming. I wanted to document for curiosity sake. And I am quite curious to see what comes to fruition…and more importantly, the how. Stay tuned, kids.

what a fantastic post this is i really love by reading this thanks for share it.
http://www.clairvoyantencounters.com

Thank you so much for this post. I was looking into what type of reading I would like to have an you just helped me out a tremendous great deal - thank you!

can you update if any of the things psychic mentioned came true? I had a reading with Louise and she said the same thing ... all of it

A couple of things have come true. i haven't met a new love, however and old one did come back last year and eventually I learned I needed to leave that be and move forward. Allyson said 2014 so we'll see how that goes.

I am suppose to pick my my life, move and start fresh, but that's fall of this year and not last. (I find it that psychics often don't do very well with numbers in timelines.)

I was checking out these readings since I met a guy at the dance club this past weekend who went for his birthday not because he drinks but likes to dance and that sounded familiar - then just read about big purchase that Louise predicted in the following year in her reading and this past Saturday I bought a car. So that one seems to have come to fruition.

HI there. I see you posted about Louise at Sacred Circle. Sadly she has passed on Oct. 5, 2014. I hope the other predictions she made for you have come true.
See this link for more info on how to commemorate Louise's passing.http://www.raymondwood.com/obits/obituary.php?id=501761

Thanks a lot for sharing this with all of us, I like it and we can communicate. Do you need buy app ratings and reviews. To boost app ranking and double app downloads now.