Bleeding Yogi and the Tenacious Jew

I promised to expand upon elevator yoga kid in an Atlantic City from last month and the guy who asked for my number in front of HG, while trying to follow me home at 2am. Here I am...expanding. These two are the delightful kinds of treats the universe likes to extend to me, while I remain completely single, and while some old train wrecks make reappearances just in time to bridge into the New Year. (I'll get to those two later.) Thanks, Universe.

During a night out in November, I randomly agreed to go to an Air Force holiday party with my friend and his girlfriend. It was going to be a spectacle for him to show up with two dames instead of one and he had this friend he was going to introduce to me. (Not that I was particularly interested in being introduced.) This is the same friend that tried to get me hook up with his brother on NYE: I’m single, not lonely and desperate, people.

The holiday party was a joke. We walked in dressed for a gala, and into the back room of a restaurant full of soldiers in civilian clothes, kids to trip over, crying infants, and women looking at us like we were hired hookers. I needed a drink. Fast.


Even after this disaster, however, I was mindful of my consumption after we left and restaurant and went to drink in downtown AC. So having given the remainder of half my drinks to that guy I was introduced to - as he was annoying me - he ninja’d out around midnight. Soon after that, everyone else left. So the three of us (the friend, his girlfriend and I) headed back to the parking garage. He went to get the car while we warmly waited in the elevator lobby. It took him 45 minutes to return in a huff and announce that he couldn't find the car. After that, I repeated what floor he had earlier disagreed it was on and after a 30 second elevator ride, we found the car. (I win.) This wasn't, however, before leaving us girls to our own devices. In this time, I managed to give a kid a fat lip without ever touching him. Boredom and whiskey will lead to interesting outcomes, like teaching strangers to do yoga in an elevator lobby because they said it was a piece of cake. And, so, I picked a pose that required both strength and balance, surely, even drunk, he’d know when not to fall on his face – except that’s exactly what he did.

He left and when he returned five minutes later without his friends, I noticed his teeth covered in blood. "Oh my god,” I exclaimed, “Your lip is bleeding!”

Without hesitation, he responded, “No it’s not.” Solid argument. Just then our guy got back to announce he'd lost the car. Superb timing. 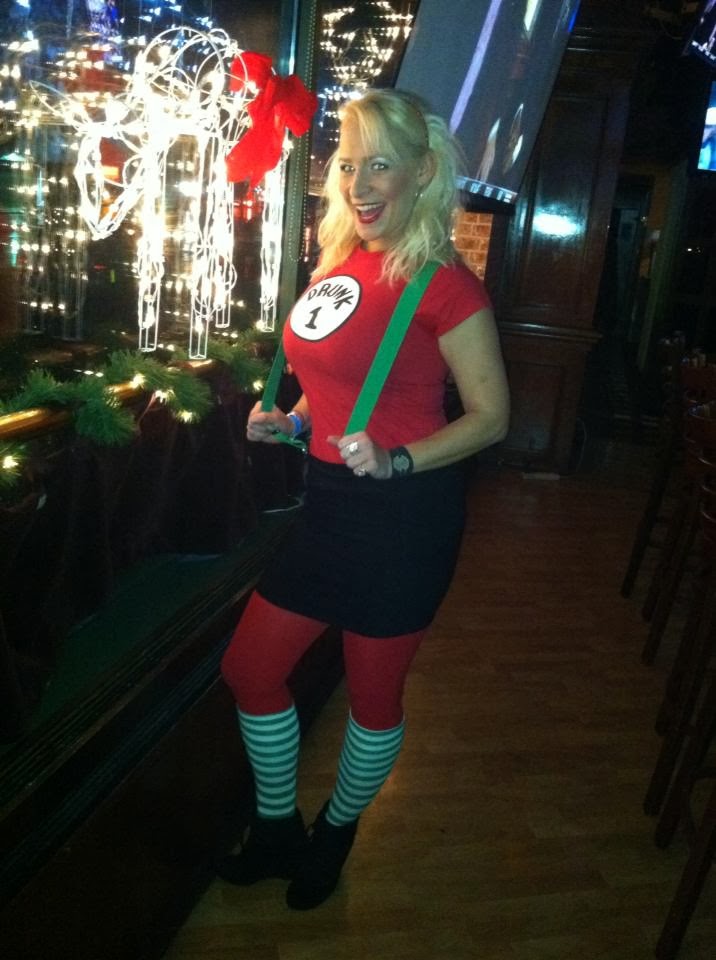 I went on a holiday bar crawl last month with GFN and GFC. (As well as GFR, a long-time friend of GFC who I've know for a while and just moved to DC.) They had a specific set of shirts they wanted to wear and, so, I obliged. Apparently, if you dress like a complete idiot, the men just come rolling in.

The bar in the photo, the event photographer kept taking my photo and complimented me on how well and confident I was at "showing" my "assets". Okay, dirty old man, pipe down. And at the next bar, a 40 something dirty old man in a blazer asks me up onto the stage area with him. I smelled free drinks. And so, up there we were.

Around closing time, I get a text from HG. The bar closes, I hop on the metro to head home and meet up with HG. This Jewish guy sits down next to me - me, still dressed like an idiot elf on LSD. He starts chatting me up and I oblige in a conversation. (I was apparently feeling very obligatory that day.) 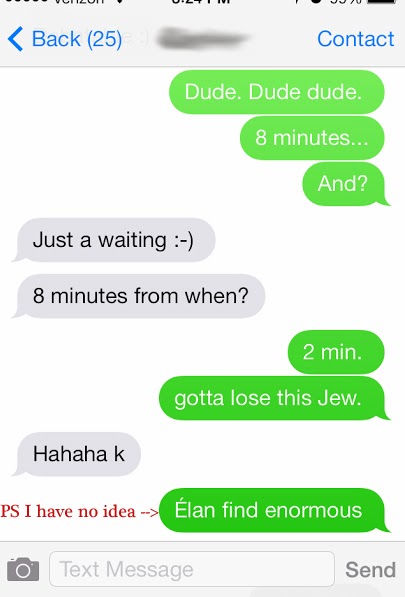 He tells me how funny I am. I relay it back to HG via text. He tells me his name. I forget it. He asks me questions. I answer. This goes on for 20 minutes, all while I'm still texting with HG telling him my ETA since he's waiting in the cold for me. As I reach my stop, I provide one last update and add: "gotta lose this Jew". He was seriously unrelenting, the drunken tenacity of which I would soon find out I had only just scratched the surface of.

At my stop, I get off of the train and, to my surprise, the Jew follows me. I see someone at the bottom of the elevator and when I realize it's  HG, I call out, "Oh hey," awkwardly, considering this other dude in tow, "I expected to see you outside."

"It was cold out there and I've been waiting for 20 minutes," he said. Clearly, this meant we had planned this meeting. I introduced HG to the Jew, whose name I had apparently bothered to memorize up until then. The Jewish kid gets on the elevator with HG and I, rides up to the top, and gets out with us. I stop because clearly, at 2am, I'm not taking two people home with me. And with HG standing a foot away, the Jewish kid asks for my telephone number in front of someone markedly more attractive than him (and with a lovely baritone voice), whom I had planned to meet at my metro at 2:30 in the morning on a Saturday while drunk. What could possibly be happening in this scenario?!

After scoring my digits, he turned around and pressed the elevator button to go back down. "What are you doing," I asked.

"Going home..." We had passed his neighborhood four stops ago. I still can't decide if he was incredibly obtuse, incredibly drunk or incredibly tenacious. I'm going to give him tenacious, even though he never called. (Thank goodness.)