Oh my goodness! She's been so quiet. Is she dead?

Don't poke me with a stick. I'm not dead. I've just been busy.

November was a clustered little month: Complete with my 8th and final half marathon of the year in Savannah, surgery, Tinder and some turkey. I also wrote a book! Just kidding, I wrote 1,400 plus in-flight words and ran out of the time and non-vicodin'ed brain power to produce any more. I don't consider this a failure, however. I have started my book for what I call the final time - the structural importance of this (third) time around being unclear to me until I lost it last week when my computer caught a virus that changed my Windows log-in credentials and I couldn't log-in to my computer. That is, until three hours later - after I had roped a friend into OMG PLEASE HELP ME! I CAN'T AFFORD A NEW COMPUTER - on the 96th time of trying to enter my password while troubleshooting, I realized one of my keys was sticking.

So that was embarrassing, but at least my computer still works because Australia and Savannah really burned my finances. Although Savannah was great - albeit with the start of an amusing taxi/hotel/car rental shit show - and I had a chance to talk through that whole mess with the girls involved, the money ran away from me a bit. However, I have no regrets and instead a goal to spend very little over the next six months. So we'll see how that goes. Maybe I can take that time to write a book. Finally.

The surgery I had was just a revision on the septorhinoplasty I had some years ago. This time, however, was not nearly as bad as the last time. While it's never pleasant to be operated on, this had been on my mind for a while and was made even easier by my mom coming down to take care of me. Unfortunately, the week before my surgery there was this postsecret post: 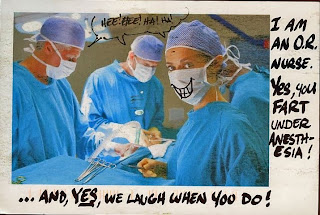 So when I woke up puffy the morning of surgery, I immediately became convinced I was going to fart under anesthesia. I talked about it with my mom before we left the house at 6:30 in the morning. "I hope I don't fart while I'm under. Do you think I'm going to fart while I"m under?!" And then again as they began to work on my IVs, by which point she was becoming irritated with my very important concern. She clearly wasn't taking the topic as seriously as me. When I woke up in the recovery room, apparently I mentioned how my face hurt and followed that up with asking if I had farted during surgery. I guess we all have our priorities.

The surgery was on Friday, my mom took excellent care of me over the weekend (duh) and was gone by Monday night. The rest of the week I worked from home. But for someone that's always out and about and active and running or yoga or socializing, sitting at home with just my laptop and Maury Povich began to drive me bananas by Wednesday.

So after the 12th episode of Maury and 68 "you're not the father!"'s, when my newly single housemate came home talking about Tinder, I was intrigued. Tinder is a dating app that lets your rate people based purely on looks based on proximity of your phones' GPS locations. (You can set your age range and radius up to 100 miles.) How it works: A face pops up,  you click "like" or "nope" based on what the person looks like in 6 or fewer photos and 0 to 340 characters. If you "like" someone and they "like" you too, then you are matched and sent into a list where you are then eligible to chat. While I had only heard it was a hook-up app - which didn't interest me - that didn't seem to be his experience (and it hasn't been mine either).

"It sounds like hot or not dot com!" I replied. And then he went into a short sell about how I should download it too. So stir-crazy me downloaded Tinder with no intention of chatting with anyone; pure voyeurism. The next day my roommate came home and we switched phones to Tinder for one another - clearly we're taking it seriously. Mid-swipes, he became agitated with the number of matches he was getting for me while I couldn't get any matched for him. Although some of his picks were questionable, not that my criteria of: would I make out with them in a bar was much better.

"I THINK MY TINDER IS BROKEN!", he exclaimed as I fell apart laughing, hurting my swollen face that still couldn't produce a proper smile.

It was oddly addicting. I spent hour clicking through guys, realizing that all of the attractive, tall men in the DC are on Tinder. GUYS - ERR GIRLS! GIRLS, I FOUND THEM! The ones we meet in person are usually 5'5", ugly, and dicks so any time we see tall, sexy ones on the sidewalk or in passing, we text one another like: THEY EXIST. I JUST SAW ONE. You know, just to keep the hope alive. Aside from providing a bit of hope, the odd addiction is likely, in part, due to the fact it's such an ego stroke. There's really no rejection because you only see who "liked" you, which I suppose is why so many Tinder guys have expressed interest/asked me out already. The results have been much more impressive than that time I did OkCupid experimentally. Giving credence to the theory I've been told for years: men don't ask me out because they're intimated; afraid of rejection; I'm "too attractive" (...am I allowed to repeat that? Eh, whatever. They were probably  just being nice.). Because in the past two weeks I've been matched over 100 times, chatted over 20 and asked out at least five. Interesting.

So with my most of my entertainment relying on working from home, Maury and Tinder, by the time that recovery Friday rolled around, I was really going stir crazy. I hadn't been out of the house in a week, save for 30 minutes on Thursday to get my stitches out. My friend called and said to meet up for sushi: I was still swollen and scabbed but I agreed if we could go somewhere dark where I wouldn't be seen much. So I met up with them in Old Town Alexandria. Over dinner I was showing my friend's girlfriend the app and came across this one guy I was all "oh he's cute and a beard!". And the table began to talk about the app.

My issue with it being that when guys get matched with you and chat, most just say hi or how are you and that's not rally much of a way to start a conversation. Another person at the table asked, "Well what are they suppose to say?"

"I have six photos on there, all of which offer of a conversation starter. And a little bit of bio they could say something about," I responded.

"I guess," he conceded. And just then I got a new message from that guy I had just "liked" while showing the girlfriend the app. And his message mentioned something from three separate photos and my little bio.

So I held it up and said, "SEE! This guy did it right!" And then I told the guy he just helped me out and looked his bio a bit more, noting that he was 100 miles away (and I have my radius set to 30 miles. "How did that even happen?!", I exclaimed.) Figures, I thought: Another out-of-towner. And he wouldn't even have shown up if I hadn't been to Old Town because then I'd be 118 miles away (his radius set as 100). And then he just kept talking and we started texting. And then I was all OMG this is embarrassing I have a Tinder crush!