When I was young and they made us do the exercise in school where you were pressed to answer the question before you even knew what testicles were: What do you want to be when you grow up? I remember my answer being the same every time, with a few variations. Often, I would put "mother", I think once I may have put "vet" - likely in my bid to get an iguana - but always, no matter what, my response included the answer: "Happy."

In a recent discussion I had with Goomba, I realized that's kind of a big deal. He asked what I wanted to be and I told him the answer I'd always had as a kid. He chuckled and asked if I had seen his profile picture lately. "No," I responded. It was this: 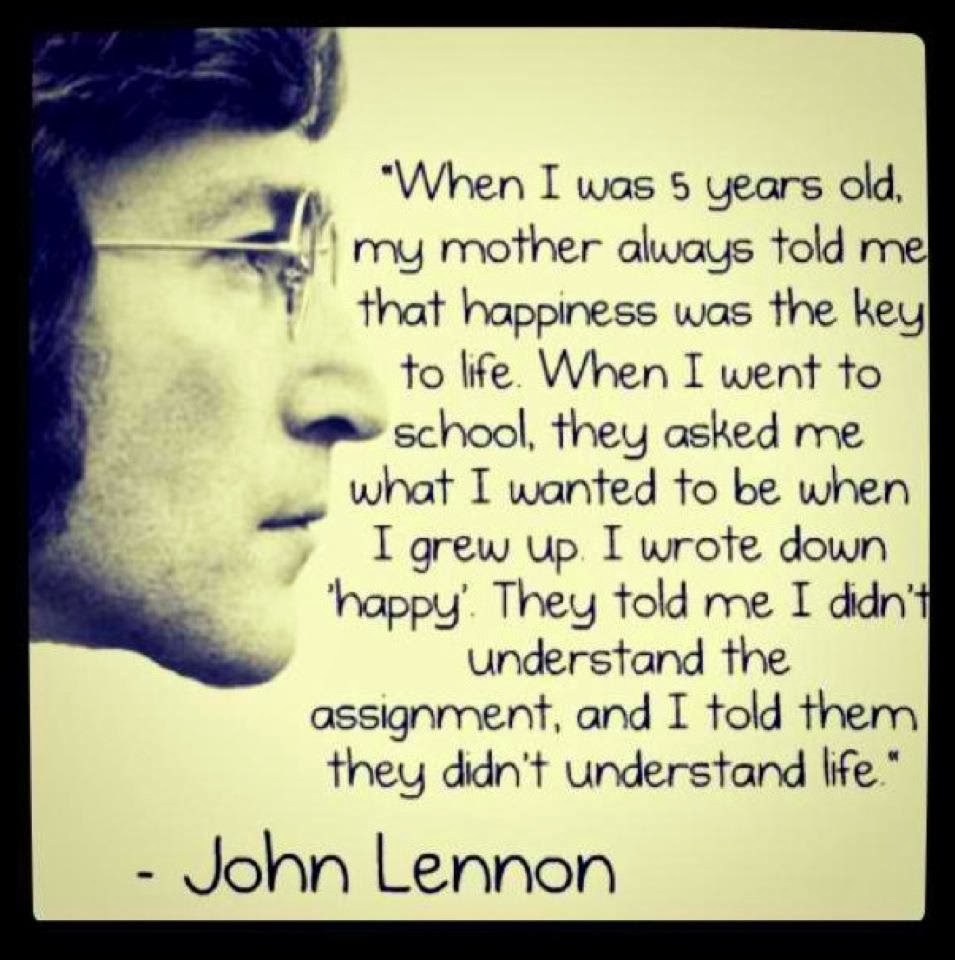 Perhaps it has been my lifelong fight with indecision that lead to this answer, but even with a more solid answer that response was always wiggled in there. Impressive for a 6 year old to recognize that the most important things in life aren't to be royal, pretty, rich, or society's standard of successful, instead: simply happy - in whatever form that takes. I always thought I was answering the question wrong, everyone else had a tangible response, but it's all I ever knew I wanted to be. It's all I still know that I want to be. It's just about finding it and staying there until I'm no longer happy and searching again.

Over Christmas my family was talking about my one cousin who is killing herself trying to get into med school. I suggested that perhaps she try something else, enjoy her young 20s and see if maybe there's another field that better suits her skill set. My sister (the PhD in behavioral science) and another cousin (in her 5th year of undergrad on her way to med school) shot back at me in an argumentative tone - protecting my struggling cousin's right to fight for what she wants. I felt attacked, I stood up for what I was suggesting: sometimes the paths we want are not the ones chosen for us and it's an impossible race to fight against nature. That is, until I quickly understood that their way of thinking, their ambitions and motivations, were of a different variety than mine. I'm not lazy, I'm just...different.

About an hour later I was sitting in the kitchen, chatting, and a subject came up again relating to this: Their ambition and the pull-your-hair-out stress it causes. In that moment I let out a sigh of relief upon the realization that I have no ambition - at least nothing like theirs. I work; I like to work; I'll never not work, but that insane drive, I just don't have - nor want. My uncle, who seems to have grown fond of my snarky nature and refusal to follow the marry-early, breed fast nature of my family, was listening when I said, "I guess I have no ambition," I paused for a moment, listening to my ambition-ful sister and cousin discuss their stress and deciding how to remark on my own words, then continued, "And I'm totally okay with that. I'm glad I don't, because it seems to drive people crazy." My sister stopped mid-conversation to confirm that it can, indeed, be a vex. My uncle, he nodded at me in what I like to think was a sort of approval.

When I was younger I always wanted a talent. I could only tout myself as being good at everything, great at nothing. And for me the idea of that used to suck. I tried to play the guitar but my fingers wouldn't fit; I was good at the clarinet, but nothing fantastic. I counldn't sing, dance, draw, paint or write better than any one else. I wasn't more attractive or smarter than the average bear. My imagination was is active, but mostly just wandering. I'm good at balancing logic, reason and it's counters - and that's about it: I have common sense. It's only recently that I have realized that being talentless is a blessing. With a talent, I feel those with them are compelled to chase them; to make something of their talent. And they spend their lives chasing these dreams, most of the time coming up empty-handed; dying feeling as though they failed. (Though anything that ends up with a story worth retelling is hardly a failure.)

Society says I'm doing it wrong - this lack of balding ambition, but, I have discovered that I am completely unchained: I don't have a talent that drives me to chase it, nor an ambition that tethers me to a target and barking motivation. I have simply to the desire to be happy, whatever that means. And when where I am no longer suits me, it's simply circumstance I need to change. That kinda sounds like fun game -a game a lot of people don't seem to understand. But six year old me was on to something, and I'm going to do that little girl justice as well and as long as I can.