So here we are: A guy from my past coming back: Psychic calling one out much? The psychic said ignore it; “leave the past in the past”. But I was growing ‘bored’ and beginning to develop again that desire to have a partner. Sure, it smells a lot like fate - but what does that mean? Because I do think everything happens for a reason, but the reason is different to each person depending on where they are, where they’ve been and where they intend to go. Perhaps this is the definition of falling in love: The elements align. 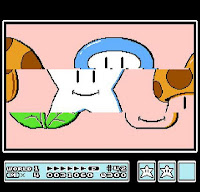 Allow me to welcome you to my analogy: Remember the slot game in Original Nintendo’s Super Mario 3 that required you to line up three boxes with the same flower, mushroom or star and would reward you with more lives depending on which you lined up – only you could never line them up? But from time to time you’d hit all three and I’ll be damned if the journey through each level each time wasn’t totally worth that one time in a countless many that you got those 1-up’s. Love is like that 1-up: Going through all the levels until you reach that one moment where the stars align.

This wasn’t one of those moments.

He saw three stars lined up where I saw a Goomba with a broken heart I couldn’t just leave behind. And yes, at first, to be honest, I was intrigued again. This guy I had this chemistry with all these years ago popped back in again. And then Potato – the rental car formerly known as Melon  - was keeping this cleverly masked Goomba at bay until I saw that heartbreak reach the surface.

It was HG and his Shiny New Object (SNO) syndrome all over again: You are happy. You are better than my ex. LET ME IN YOUR LIFE!

Oh, another wounded bird? No. Been there; not going back. Sorry kids. This isn’t the love story you wanted (even though is one that was predicted).

So this is how the story really goes:  The first night we ran into one another again, he slept on my couch, we spooned and – oh how long it had been. It was nice. The cuddles! But soon – oh, so so, soon - the situation turned into three stars versus a flower and two mushrooms. The following weekend they began: The drunk texts. They quickly escalated into SNO symptom type texts. I was out with GFC who understood as little as I did what exactly was happening that first week out. Later that same evening, I took home Potato - who just “happened” to end up at the bar next to ours (Yeah…right.) – after some serious karaoke and a love affair with Fireball.

Completely irrelevant to Goomba, I called Potato stupid so much that 1. GFC renamed him Potato (the aesthetic likeness becoming just a lucky coincidence) and 2. That scantily clad and messing about, he stopped me to tell me, quite sternly, to stop calling him stupid. Apparently – no matter where the leagues stand and how uneven the fields are, you can’t stand in the Majors and diss the Pony League. Noted.

Anyway, weeks pass and eventually conversation with the Goomba turn into how amazing it is that we meet again eight years later. SNO confessions are thwarted with increased frequency. Bruised hearts and confused souls say weird things fueled by vodka – I know this better than anyone. Really. But this was getting uncomfortable. However, I couldn’t leave him there; he needed me. He is a friend. And he needed someone; he’d left everyone 200 miles away to be with his (now separated) wife. Plus, he's a good guy.

I am not the answer. I am not love, nor the solution. You need friends; support? You got it. But hope comes from within, my friend.

A few weeks later he called his wife. They met for dinner. They agreed to a divorce. And I will continue to make room for him in my life as his calms down a bit. Evidently, I am the help.

Meanwhile, I otherwise kept myself occupied with running (three halves and a ten miler, to be exact) and drunken socializing. It was during this time that in walked a guy who - on a Sunday at the bar, after I ran my second half-mary of 2013, and after semi-ironically staying at Goomba’s the night before (since he lives near the starting line) - for what appeared to be no reason, called me a whore. I made him cry. And then we banged.