Late April (twenty-seven), introduced divorcé number three. Upon berating him for calling me a whore, he asked if we could step outside to talk. Then, once outside, he began to cry. Then, once crying outside the bar, he asked if we could take a walk. Apparently, men are as embarrassed as I am for drunkenly crying in public...which is why I don’t (unless my purse is stolen…or my phone is gone…again).

Somehow I remained compassionate. Perhaps it is because I’m not, in fact, a whore and he had no reason to call me one - aside from the fact that I “read” his friend and then refused to “read” him. (This sequence of events I having just now remembered ::high five, brain!:: ) Once his friend was "blown away" by my accurate “reading” of him, he told me to read his friend and I declined because I felt his friend was not open and, honestly, quite judgmental and guarded. Evidently, as he so eloquently exclaimed after my decline, he "didn’t want to talk to a whore anyway".

So once the waterworks were on, I agreed to take a walk. At about 1am we rounded the corner and found a bench about two blocks away. He told me how he didn’t know why he said that to me; how sorry he felt for saying it. It soon became obvious this child was mildly broken: he was judgmental because he was guarded: he was guarded because he'd been hurt and wielding the if I hate you first you can’t hate me sword.

Maybe people’s emotional growth stunts once they marry. Or perhaps I’d met a perpetual child. Or just a confused boy. However, there was a chance it was a combination, because I soon learned that he had gotten married at 23. His divorce would be final two months later in June. And he proceeded to cry through a story of how he is a good guy and "had [his] face smashed in for standing up for a woman whose partner was knocking her around at a gas station" in California. (It happened. I saw photos.) I thought Californian’s were supposed to be nice. Evidently the Brian Wilsons of the world smack women...and call them whores for no reason.

After I COMFORTED THE GUY THAT JUST CALLED ME A WHORE FOR NO FUCKING REASON WHAT-SO-EVER FOR CALLING ME A WHORE FOR NO FUCKING REASON WHAT-SO-EVER, we shared a few stories and I was mildly piqued because his life story was more interesting than mine. Then, we headed back to the bar. I found my girlfriend, Ginger, upstairs getting cuddly with a guy in an Affliction t-shirt and immediately tried to stop the impending mistake. (I would later find out she had no clue about aptly named Affliction t-shirts: The brand itself, a warning to self-respecting women.) I, again - this time half in jest - asked the bar back for a piece of the corn on the cob that I had seen him show up with approximately six hours prior. A few moments later, while sitting on a couch with the guy who would later become known as Derp, (because as his friends put it, he’s “the dumbest smart guy they know”; proved to me over the next few weeks), the bar back brought me a piece of corn on the cob.

As I watched two of the five people in the upstairs bar karaoke - while waiting my turn for the song my girlfriend signed me up for - I unwittingly gobbled up the corn much like a pig eats slop, no doubt. (To be fair, I had run 13 miles that morning and had  little more than rum and coke and ciders to quell the hunger for the past seven or so hours.) My name was called and I declined momentarily to finish my cold grilled corn, picking pieces off of my chest to pop them in my mouth and giving exactly zero fucks as to what this Derp character thought, while wondering why exactly he was still there in the first place.

Just then, I recalled a conversation we'd had on the bench outside. Something about agreeing to let him cuddle – JUST cuddle, because I wasn't rewarding bad behavior. I finished my corn and sang so well that Ginger left her current affliction to step and give her rendition instead.

We headed back downstairs soon after; they had turned the lights on. Derp asked if I want a drink. I had no answer. He brought back two waters. He was either cheap or caring.

I waited out my girlfriend till the bar closed. We took an illegal cab back to my place (because hers is too far away) and she yelled at Derp to pay the driver, then almost immediately fell asleep on the couch. Derp followed me upstairs. I got into bed and turned on my sleep playlist. I was genuinely ready to go to sleep; I was exhausted. I had only had three hours of sleep total since Thursday.

What's that? Why so little, you ask? I had no sleep on Friday because I consumed an entire bottle of wine by myself, mistaking ER being late to go out for drinks, for him not coming at all. Because I didn’t want to drink alone and my roommates weren't home yet, I invented a game wherein GFN and I turned off all of our auto-correct and spell check options and didn’t allow ourselves backspace, then continued conversation. The more drunk we got, the harder it became to type and the harder it was to decipher what the other person was saying. It was funny until I woke up the next morning and saw that I had texted Potato in this mode...


Eventually, however, ER did show up, we went out and I got drunk enough to think that what I typed to Potato should have ever been sent, threw up on my floor, and then spent the next morning like this while waiting for my Chinese food to be delivered to my front yard: 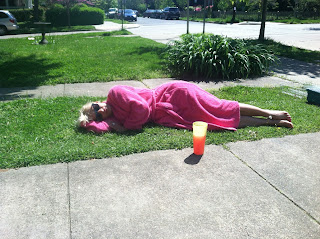 Saturday evening GFN, GFC and I headed to Goomba’s house. Our wake up time was approximately 5am for the half marathon and I couldn’t sleep for shit on his floor. And I certainly wasn't going to sleep in his bed and give him any ammunition to his imagination that we had potential in that capacity.

So by Sunday, I was running on fumes, but to my surprise the cuddle turned backrub, turned enter divorcé number three. While I originally had no intention of it, evidently I was still on the prowl and hooked up with nary a regret (particularly after my next encounter with Potato, but I'll get to that in a minute). Then, I was awoken at 7am to – what appeared to be – a 20 year old libido in a 32 year old body. I was more interested in sleep...until I wasn’t. So work took a backseat: Had I gone to work, I would have had no focus and possibly have fallen asleep on my desk. And no one wants to see their co-worker drooling. Besides, Derp talked me into it: I could skip work for a day of such activities. Unfortunately for me, this sober part of the romp could only last until he had to check out of his hotel. So, with nothing else to do that day but nap to the sweet sounds of Maury Povich, I offered to drive him back.

He seemed to think that we’d have enough time to Christen his room and grabbed another Durex from what he originally thought was an urn at the foot of my bed. It was one of the remaining condoms I've had since 2009 when some gays had stuffed my purse full of free “safe luv kits” at Secrets (where I got hit on by one of the dancers wearing only three socks). And that’s how much of a "whore" I really am: My free condoms expire (and I decline sex with beautiful nearly naked men). I chuckled at his suggestion as I opened my purse so he could drop my about-to-expire condom in and said, “This is like the mother who allows her child to put cereal in the cart that’s never going to make it to checkout”. He laughed and told me I was funny. Again. He told me I was funny about as many times as he had told me I was “fit”. I surmised his ex-wife was both fat and lacking a sense of humor.

We got to his hotel with 12 minutes left to checkout. He thanked me for the night. I laughed. He said, "I don't know what to say; I've never really done this".

"Well, me neither, but 'bye' will suffice." He said bye, kissed me and hopped out of the car. He said something about calling. I said I'm a huge texter and fully expected to never hear from him again.

Mid-Maury Povich, he sent me a text. And then again when he landed back in Sacramento. We continued to text nearly every day and eventually, once it became cumbersome on our fingers, switched to chat. We chatted for about six weeks, until mid-last week when all hell broke loose, shit got fucking ridiculous...and...I suddenly realize that this is long and I need to have a Three Di·vor·cés: The Follow-Up (a.k.a. we’re way past introductions).

Because nothing ever turns out neatly - especially with a smattering of divorcés.