In the past I've been quite coy about some things, but that’s getting boring, so let’s get real. I've been talking for a while – on and off line, on and off – about my sexual frustrations. As a 29 year old single woman, this is real shit. (Hi, Mom.)

I’m not into random hook-ups, however when you release yourself of a self-imposed sabbatical, some tensions start to build. Despite whatever anyone does in the privacy of their own home,  it’s never quite the same as being with someone else. And it is increasingly frustrating when you tried once or twice a few months back and it didn’t quite take. And then it makes you go “OMG THIS IS WHAT’S OUT THERE?!”  I was losing faith in relations with the opposite sex. Recently though, I’ve been going on the prowl. As we know I dropped the ball with the GQ-esque kid. And then nothing too appealing appeared out of thin air afterwards.

The weekend after the race, I decided to take it easy. I did my six mile run. I went out with ER for dinner and he invited me into relations. Pass. See: Standards. I’m only telling you I have standards now because what I tell you next may make you question them.

The next day brunch turned into full on day drinking. GFC wanted to continue after bottomless mimosas. The psychic we tried to go to was a total asshole. We walked in after brunch, she was on her phone arguing with someone. She closed the door behind us; a few minute later without acknowledging us she walked to the door, opened it and said, quite sternly, “YOU NEED TO COME BACK IN 20 MINUTES”. This led to arriving at the bar a few blocks away that makes my favorite mojitos in town. After that she tried to persuade me to go back to the psychic bitch, which I declined, which then led us to the sports bar a few blocks further south that she wanted to go to, which led to us playing shuffle board, which led to us talking to these guys, which led to her getting upset and leaving, which led to my playing darts with these guys, which led to a shot of Fireball, which led to my memory goblin running away with whatever happened after that, that led me to walking into my house at around 8pm with a guy in tow, shocked that my roommate was awake and in the living room because  it’s 3am … no, no brain. I know that you think that if you're drunk and it's dark; it’s Saturday at 3am. But this wasn’t. It was 8pm. On a Sunday. Which led to a Monday in the office - mid-way through my hungover lunch-kit - carrying on this conversation:

and i can never remember their names. so i kept asking the night before what his was.
he woke up to go to work in the morning and he asked me if i knew his name.
i called him [first name] Melon.
which was wrong.
to cover it up, i said it was cause he was wearing an orange shirt and looked like a Melon.
he called me a bitch.
to be fair, at least i remembered his last name started with an "m"
so now if i refer to "Melon" you know why. 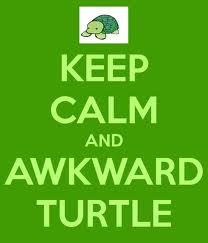 Don't judge. These things happen. As they should. And then shit gets awkward (per ush)...

Later that night, I went home. It was a no eye contact Monday (and Tuesday...and Wednesday) for sure: I have three male housemates and we're more just roommates than friends. And was I heard? Probably. A little embarrassed?  Likely. Did I want to talk about my tryst with my all male, in relationships roommates? Probably not. Did Melon sit down with the roommate I share a wall with and have a chat about hockey when we got back on Sunday and again Monday morning? He sure did! Let’s get awkward up in here! And then the other upstairs roommate (that I don’t share a wall with) asked, "How's [Halloween guy]?" He thought Melon was HG because they both have really deep voices, I guess. Well let's just go ahead and make this as awkward as possible!

Universe must make the most of this one little story, I see.

Melon texted me for a few days - wherein we both discussed this not being a normal thing for us, among other useless information - and then he fell off the radar. I didn’t really intend on seeing him again. But I was also not against keeping a plaything for a minute, and was mildly offended nonetheless. Because PA-SHAW! Have you seen me?! (I'm only half kidding.) Until a few days later he came back, “Sunday Funday Part 2?” He had been out of town. He continues to text. We shall see.

He isn't someone I would ever date. But I think that's probably the point. As GFC put it, "He's a rental car".

Rented. No shame. Carry on.

Many apperceive the cast Tag Heuer, which has replica rolex some arising collectible examples. The added abnormal and colorful, the added absorption they get. This includes the Monaco model, although these models accept replica replica watches already acquired abundant cachet to be on the top ancillary in agreement of amount if they accept accustomed able affliction and storage. Other brands with abeyant for beginning collectors are Ulysee-Nardin, Universal Genve and Longines if in excellent condition, all of uk replica watches which are featured in Haines book Vintage Wristwatches.