So that Steeler playoff weekend third date thing happened. It actually happened. And it went like this:

On Friday he met me at work at 2:30p. We drove up to Pittsburgh and checked in. We went to dinner, then drinks. We got drunk; I got drunker. We went back to the hotel. The next day we went to lunch at my favorite place to eat. We checked into our next hotel (because he accidentally booked a different one drunk on Thursday night). We got ready - rather I got ready while he went and got me velcro from Micheals (this tooks some coaxing; good sport). We taxied to Station Square for bar before the game, then ferried across the river to the game. He surprised me with the best fucking seats (see pic). And he gifted the tickets he originally bought to a friend of mine. (How nice of him.) We split a sandwich at the game and I had three ciders to his 60 beers (fine, fine divided by 10). Unfortunately the Steelers lost and we were both a little salty, citing 'KUMQUAT!' to elicit each others' silence. And it worked. (I think we used a total of two 'kumquat' silencers each this weekend, which is pretty good considering two near strangers spending so much time together. I highly suggest this method of disagreement intervention.) We ferried back over and headed to a bar for drinks (which he didn't need any more of, so I got him water and he complied) and food. (Might I suggest Bar Louie's chicken nachos? Amazing.) His friend dropped by to hang out with him; she loved me so much she gave me her number and said we need to hang out. (Sure.) Around 2am, we taxied back to our hotel and he passed out while I watched and episode of Friends for about four seconds before I fell asleep. 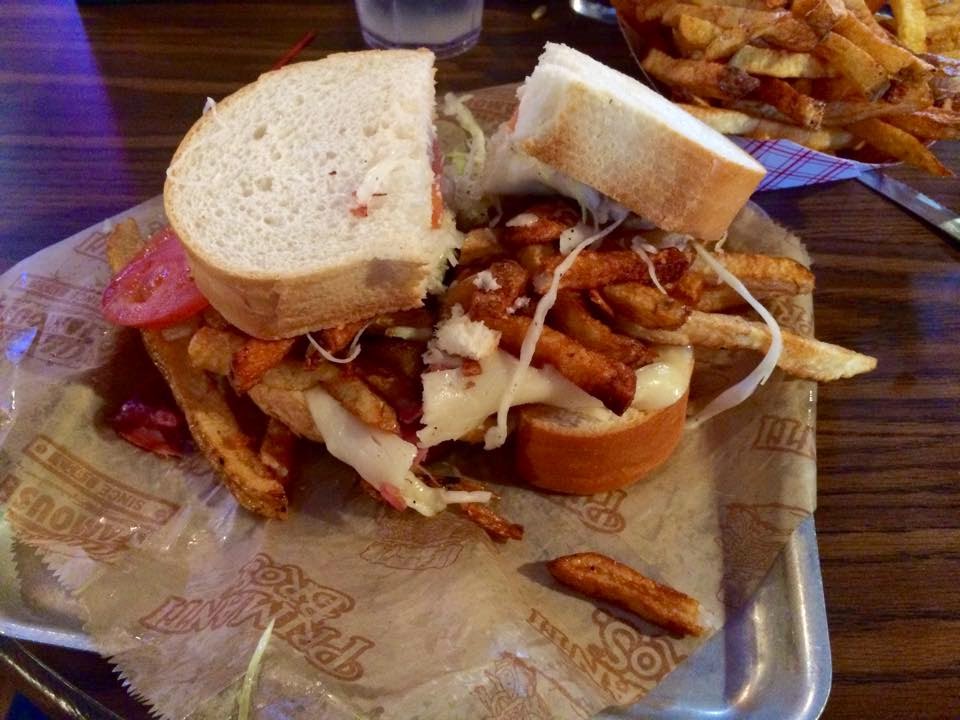 The next morning we woke up and checked out by 1pm - using every last minute till check out. A slow, recovering saunter. We headed out and down to Primanti's for sandwiches (yum!) on the way to Gabes (because I wanted pants I got the wrong size of at Christmas). Around 4pm, we finally began to make our way back to DC. (Five minutes in, I rear-end a car; but really it was more of a bump and not entirely my fault.) Mid-way through the four hour drive, I couldn't take the near-zero visibility of darkness and rain combined with wicked winds anymore; they made me so nervous driving up and down the mountains of West Virginia and Maryland. We quickly discussed and he said he was fine getting a hotel at the midway point for the night. (This was my favorite part - although I'm not entirely sure why.) So on a quick whim, he booked the hotel and we were hanging out in Cumberland for the evening - went to the only restaurant in town for dinner (and drinks) then back to our third hotel in three days. We watched some movies; did some things; went to sleep. Woke up in the morning, I emailed work I would be late, packed up and drove two more hours back. And when I left him at his car - even after all that time together, I wished I didn't have to - a reaction by which I found myself incredibly surprised. And a little confused. Not confused were some things I learned from this weekend:

Number One: You can go all in to something you are well aware could end in disaster, and end up pleasantly surprised.

Number Two: Just because a guy talks incessantly on a first date, doesn't mean he will continue to do so for the rest of time. (Mentioning it to him probably helps.)

Number Three: Lists of non/desirable traits don't really mean too much. Tribal tattoos, a kid, military, brown eyes, under six feet, voted for Dubya twice (once I can forgive; that second time is atrocious), an affliction t-shirt, online. And yet, I found a fondness in his company. He was nothing I would imagine from the canvas of description that I had painted in my mind.

Number Five: Don't get too drunk with someone you don't really know. But if you do get drunk, make sure the following night when they get too drunk, that you're there to shuffle everyone home that time and try not to judge too harshly in the morning - even if you wanted to smash all of their toes that night with a 90 pound sledgehammer. Fair's fair and tit for tat.

Number Six: Single dads - not too shabbs, but appear to smoosh all partying into off weekends.

Number Seven: Don't eat wings if you're going to share a bed with someone.

Number Eight: Women still don't understand men. Even if everything seems so obvious, once you throw in some interest on the side of the ladies, ladies will cock their head to a side and forget about how they understood where they were, what they were doing, and all she knew a week ago and substitute it with five hundred "what ifs" and confused little shoulder shrugs, waiting for the next confident moment where she can be like: "Oh, psh yea, he's totally still interested."

Number Nine: (On a related note to Number Eight) After a 70 hour third date, when friends ask, "So what do you think/where's it gonna go" the answer will still probably be, 'I don't know.'

Number Ten: When someone asks you to do something cool, even though it has great potential to end it completely fucking irritated disaster, you fucking do something cool. (And offer to drive because 1. It's polite, 2. If he pays for literally everything else, you should at least pay for gas and, 3. You might need a getaway.) Because it could all turn out just fine - and with an NFL playoff stub and 10 lessons to boot.