The One Where Someone Threw a Rock

The past few weeks have been an enormous flurry of travel. Remember the time I said I was going to write and post photos all about New Zealand and then didn't have yet to? It's something like that.

After Mexico, I was all over the place: Twice to PA for family birthdays (gram turned 80 and the twins are 1! -- and adorable.), north for a friend's wedding, Dewey Beach for a single people's fun weekend - undoubtedly a good time, and then VA Beach for a 4 day weekend and a half-marathon, and after four days back, a week in Savannah, then leaving a day early to fly back to DC to road trip up to Pittsburgh for a football game and tailgate. (And we won!) This weekend will be the first I've been home since August 11th, although last weekend was almost derailed and I almost had to stay home and miss the game. Why, you ask: Because while in Savannah, on a nice family vacation, some jackass threw a rock through my window.

Yes, this SAME EXACT window: One year and 17 days later, looked like this: 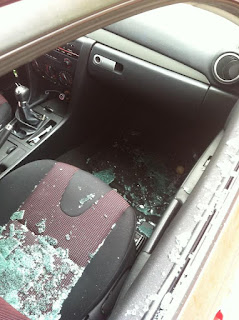 Last year, this happened and the first person I called was my mom...sobbing. I then called the insurance companies and eventually the glass company. Last week I thought quickly on my feet - I had exactly 3 hours to drive home, unpack from the week and repack for the weekend and meet my friends for our four hour road trip: I called the glass company (then insurance companies and quickly my mum, not sobbing), made arrangements to drop off my car for the weekend - grabbing my 2nd pair of keys when I repacked, so I could pick it up while they were closed Sunday, when we got back - I put my rear foot mat on my drivers seat to avoid a glassy bum, called my friend who was driving and asked if he could pick me up in a different place (still on they way), drove home, unpacked/repacked and headed into traffic; dropping off my car five minutes before close. I then walked up to road (with armfuls of stuff) towards my office so I was easier to be picked up and we could get on our way north - for a fun weekend, despite a crappy homecoming - and it was something like this: 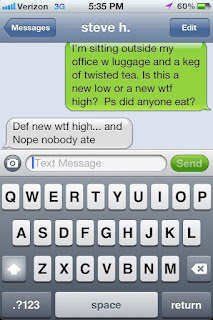 The weekend was great. The crisis was averted. I didn't let this spoil it; in fact, at times I totally forgot (and that my dresser, while repacking, broke into 3 5 pieces.) Sure, I was pissed at first that someone had thrown a rock through my window for no reason - nothing was taken. (In the photo above, you can see the rock, which still resides in my car - even after the auto glass guys vacuumed everything out, they left the rock. What a sweet memento!) Losing the money sucks, especially after having just replaced it, but this morning I wondered: What are the chances of that same window breaking twice? What's the point, Universe?

And then I realized, a year ago the same thing broke me down: A broken window broke me into pieces. And this year, just 382 days later, it was just a window; just a problem to be solved. Just last year I was weak, withered and broken and, perhaps, this broken window shattered again to remind me that things get put back together and the repairs from what once was shattered stops the rain from coming in again.

I am in a good place now; nearly such a wonderful place. It took an asshole with a rock and a broken window to prove that to me. Life is so sublimely strange sometimes.