Off the Vodka: Week One

Per my last post, I decided to break up with vodka. And like any dysfunctional couple, I smell an eventual reconciliation, but one where the other person cheated and so I will re-enter the relationship weary and un-trusting. Also, like any good dysfunctional relationship, vodka and I have been teasing one another - and by that I mean, I have taken a few good sips of friends drinks with vodka in it. WHAT?! I needed the caffeine!

It snowed a lot this past weekend; over 20 inches, I believe. And after my roommate made us ("us" meaning myself and 2 of his visiting friends) watch him play some xBox war game while he wore a headset after I got home early from work since the snow started to stick, he then called me shallow because I said I didn't care of anyone else (read: him) drinks for free at a bar this week. (That was a run-on.) Because 1. I don't and 2. he makes enough to pay for it and I've scored him a many free drink before. Was the favor ever returned? No. (P.S. Hi Mark.) After I got heated over that - which I deem to be the worst insult - he told me I was over-reacting. Even his friend said my roommate deserved a kick to the face. I agree. And I am still awaiting my apology.

So I had to get out. In the worst storm in many, many years, I got ready, put my snow pants on over my jeans and headed out to the bar. It was a great night. And because I broke up with vodka, I had cider the whole night - they have Strongbow on tap there, yum - and I remember everything...I think. I only took a few sips of friends' Red Bull and vodkas. I ended up with 2 bruised knees, but that's only cause I started playing in the snow after the snow reached about 16 inches by the time we left the bar. I stayed at a friend's.

We woke up the next morning, played risked and waited for the pizza that never came (shocking, 20" of snow shuts down Papa John's). Then we headed out for the snowball fight. We walked down the center of the street; a surprising number of people were out, all walking down the middle of the snow-covered roads and we saw only a few cars. 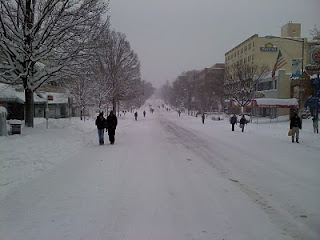 Then we got to the epic Dupont Circle snowball fight. And despite some very rough men - one who dropped a brick of snow in the center of my back, which still hurts from it and another who got 3 feet away from my face and launched a packed snowball as hard as he could at my ear, fucking ow - it was a great time. 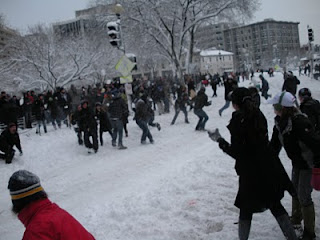 Afterward, I went home to shower and change then headed back out to VA. We went to the bar and I stayed at another friend's house because the metro closed at 11pm. I also remember this night, as I stuck to cider again and a Malibu and Sprite (Gross! I miss you vodka tonic!). I had a few sips of Red Bull and vodkas again, but that was about it. I remember everything that night. Sad? Or exciting?

It really sucks that it took me being completely uncomfortable and stupid at a near stranger's house for me to get the memo that pacing (for me) might not be the issue so much as vodka. When you're at a bar (or playing drinking games) and you have a drink in hand, you naturally take sips of it; you don't count the minutes between sips and after you've had a few you definitely aren't thinking "Do I really need another", you just go for it. I really enjoyed the right point of tipsy that something with 5.5% alcohol gives you, as opposed to 40% - it's hard to pace with 80 proof because it seems to hit you all at once and then you decision-making skills go WHOOPS! till you wake up the next morning certain that it's not your dinner on the floor...to later discover that, yes, actually, oops, it is.

Anyway, so far it's been an interesting week. A week I can fully remember. I remember laughing and I remember someone else being drunk. And it makes me sad that I missed all that when I drank too much as a kid up until last week...