Had Dorothy chatted about more than three things, I probably would have added eating and garages and work. Everyone wants to take me out for meals this past week and say goodbye. It's nice, but I'm fairly certain I've gained about 10 pounds - although that will come in handy when I'm living off of eggs and quinoa - and avoided cutting more onions than a sous chef. (You know, tears? So far, I'm tear free.) On the frustrating side of things taking up time I don't have, the garage fucking up my car on repeat has been an infuriating journey. After trips and one to the dealership for diagnosis, I learned the idiots put my directional tires on the wrong sides of my car. Pisshats. It's still not fixed but I'm going to have the rear shocks changed in PA before I leave and my friend is going to pop in some new spark plugs so hopefully that makes my car/home a happier Betty. Because, as I have to continue to explain to them: This car is not just my car, it is going to be my house.

The past two weeks have truly been a fucking whirlwind. Trying to get everything done - including trying to wrap up and prep to leave work without leaving behind an un-fillable dent - has been insane. In fact, tomorrow is my last day. Coincidentally, it is the same exact date as when I began my job 8 years ago. Kind of crazy to think about. And as much as I thought I had been properly prepared both at work and at home, I don't think anything can really lend enough time to this kind of event.

It has been in this time that I have been called courageous more than I can count. And that I have realized the only difference between stupidity and courage is failure or success. I would be entirely full of self doubt if it weren't for the amazing people encouraging me along the way. I started this headstrong with an idea I thought was both brilliant and incredibly stupid and as the time to give up all senses of security neared and I began to question my decision, it was outside influences that pushed me into enough comfort to commit; to remind me why I thought to do this ridiculous thing in the first place.

Anywho, other items filling my shrinking time have been a dentist appointment: my cavity conveniently fell out two weeks before I lose insurance. Signing up for a short term health care plan:
Hopefully I never use it. Still going to yoga three times a week: Namaste, bitches. A dermatologist appointment: I don't want skin cancer, yo. Upgrading my AAA: I need those 100 miles of free towing. Tinting my car windows: We don't need people peeking into my house when I"m tryin to sleep n'shit (my mom's makin me Velco curtains too...sweet). I  began to pack: My room now looks like a disaster area: 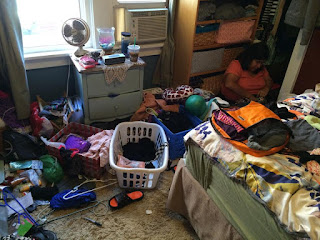 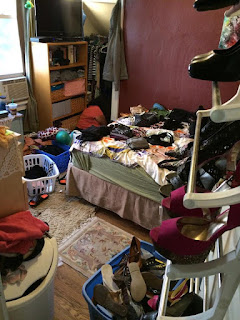 And I think I may actually be done buying shit. THANK THE LBJ. I never thought I'd say I didn't want to buy stuff, but I'm tired of researching and buying things for this trip. It's a lot of damn things too. Look! 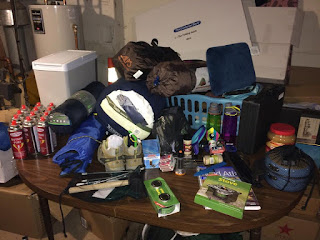 I also practice packed my car and posted a photo. From this I learned that people were even more shocked than I was that things fit where they fit in my head - and even better than how they fit in my head. However, the real test comes in just 4 days, when I load it all in and say goodbye to DC. 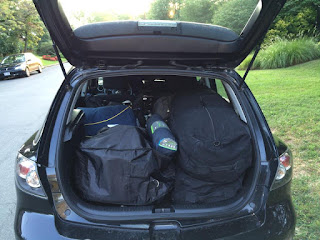