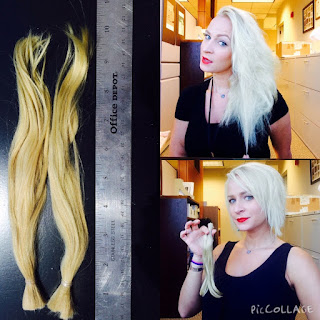 Last week, a lot happened. For starters, I cut off all of my hair and donated it to Pantene Beautiful
Lengths. Five damn years in the making! (I really meant to have more updates than that, but I did it and that's all that really matters, right?) Anyway, that's unrelated aside from it being my last big calendar goal before vagabonding and the fact that I'll save money on shampoo and maybe I can wash my hair in Wal-Mart sinks now (until someone calls security on me, haha).

That same night Vanilla called me, after I hadn't seen him in a week, in part thanks to the butthole comment. I had been avoiding him and upset by my haircut (the photo is after the second cut to repair the tragedy it was at first; the guy got hella scissor happy), decided to pick up the phone and finally rip off the band-aid. At first I tried to ease into it with a "I just don't think we're compatible."

About 30 minutes worth of him saying he hasn't been himself, blaming work and stress and "I thought we were over the whole butthole thing already" and "I can be better, let me prove myself to you" I was getting warn.

"You are who you are and there's nothing wrong with that. You don't need to change yourself, you just need to find someone who is compatible with who you are." A valid point, I thought. He didn't think so and went on to tell me again he just worked to much and begged me to give him one more date to prove himself; that we just needed to do more fun things together like before. I prefaced my response by saying that you should be able to do nothing and still be happy to be with that person, but I would think about one more date. But let's be real: After the butthole comment, it was already done.

He ignored everything I was saying rambled on about how he just wants to make me happy. How I bring him out of his shell and he wants more of that from me. I told him I don't want to do that for anybody; I don't want to hold someone else's workload and if there's something he feels he needs to change about himself, he needs to figure out how to do that alone. He told me how interesting I am. I replied, "You're not."

I'm not sorry I said this but I'm sorry I had to say it. He wasn't listening and this came after he made the absurd request for me to name the thing I like about him least. After I scoffed, he said "Okay fine. Name the top three things you dislike about me most," as if my scoff was over the fact that I could just choose one, not that he has asked in the first place. What a weird fucking request. I finally got him off the phone by asking about this last relationship. When he told me it ended because he wanted it to and she didn't let him go easy, I asked him how he felt about that. He said "I wish she just would have respected what I wanted because it was really annoying." I simply replied with an emphatic OH.

"You told someone you dated that you didn't think you were compatible and you were upset because she didn't just respect your feelings and let you go?"

"Oh," he said, deflated "I hear what you're saying." Shortly after, we got off the phone, but it certainly wasn't the last of him. Following the phone call and into the next day, he continued to text me, first with a random selfie and then about the date he wanted to have. Eventually I responded, "I told you I would *think* about it. And you're not giving me room to think." What I really needed him to do in this time was lay low and realize I wasn't any special and that perhaps I was right and it is time for him to move on and not beg for another chance without someone who already explained their lack of interest. We'll see how that goes, as he's currently taken direction and given me the break I had requested for over an hour - and again via text.

On a better note, last week I was also gifted a DSLR to document my travels, which meant the world to me. I had been debating the cost since a lot of unexpected costs have arisen, with vaga preparation and car repairs (which, unfortunately means I am unable to meet my savings goal for the month - in fact, I end up in the negative). However, like magic, the camera I've been dreaming of for years appeared. (I have so many incoming pictures for you all now!!)

Most notably, the day after my hair and Vanilla, I quit my job! HUGE. A lot of shit in 20 hours. And I can't explain the anxiety that rushed through me as I made that no-turning-back conversation go from practice in my head to 100% real. There is NO turning back now. And my workplace has been extremely supportive; curious and excited, even. So that was nice; both a stress and relief at once, as I come to terms with losing all sense of security.

And this past weekend I entertained my 'farewell' party, prior to which, an *incredibly* generous gift was bestowed upon me. I was gifted an amazing amount from a dear friend. I was blown away; shaking, literally. In addition to other gifted cash, this brings my total up to: $2301.77 (as GoFundMe takes 7.9% plus 30 cents per each transaction). This money is so fucking important; without it I can do none of this. But, what continues to remain so surprising by setting up this account is that each gift feels like a nudge in the right direction: 100 people behind me cheering me on, wishing me the best and 'living through me'; "make me proud" said one fellow Imgurian (unrelated to GoFund) and I will try.

This blog is so nice to me. I will continue to come here again and again. Visit my link as well. Good luck