The single dad wrote his own dating obit last night. Interestingly, I thought his three strikes would be attributed to this thing he did where he got drunk and then aired his grievances. The first time I was "too aggressive" a time or two in Pittsburgh. The next time I had made a joke that I was going to Tinder around the country to go to all of the Escape Rooms for free. And "he knew what that meant" and "it really changed how I think about you". He knew what I meant? WHAT DID I MEAN?!

I was so caught off-guard and offended and (my Achilles heel of being) misunderstood, that I was up until 5am writing words down to try to get it out since he'd since fall asleep after the textual attack. Words like this:

I don't want to spend my time on someone who is just waiting for me to fuck up and then scrutinizing me when I do. I could let things you've said change my opinion about you, but I realize that one thing - or a few - you've said does not define who you are to me. The only suspicion I have is a person who says the perfect thing 100% of the time. Perfection is a fallacy. I am real and thus imperfect. I don't want to spend time with people who, not only do not forgive my imperfections - my shit moments - but holds them against me. I don't want to be with someone who makes me cry alone, in my room with little reason and no opportunity for defense, for simply being human. There is an undeniable beauty in the fault of others - a shadow of someone else's self doubt that reminds us that we are not alone in sometimes failing.

We are not solely baring the angst of doubt and regret and things wrongly said and misunderstanding and judgement and history and turmoil and fear and everything that comes simply with existing. But that beauty fades, it backfires when we are judged for our foibles - mistaken for a villain only by opinion and error. I am far from perfect and I don't pretend to be anything but, and thus, I do not hold others' imperfections against them. Instead, I try to understand them. We are all revisions of our former selves; shaped by history and experiences and family and friends and good times and bad. And I can't endure the accusatory misconception that just because you didn't like something I said, that I am less worthy of adoration. Or that your feelings hurt mean mine matter less. We are all fighting the same damn fight, and you are either with me - helping me to stand and understand - or you are against me - your bayonet of words held tight against my throat.

There is no middle in this war. We all bear the weight of a patchwork heart. And we all must pick a side.


The next morning he was "oh it was just a misunderstanding." WAS IT?! To who? And fuck you! But I let it go - eventually. And he apologized - eventually. The week following all of this being ironed out began the first in a string of him cancelling on me. The first was January 22. Having not seen him for a week, he was going to come over, but instead went to a friend's farewell dinner. (His friend was moving to Texas.) Which, normally, is fine. But 1. I only found out he cancelled because I ASKED, 2. He didn't even play the "Do you mind if I cancel, because..." card (of course I'd have obliged) and 3. He didn't apologize for cancelling. The following week, I was suppose to see him on one of the off days from his kid and the weekend, then he ex went out of town for work and the Single Dad seems to not have a sitter. And there was yesterday. This cancellation was my favorite. By this point I began to say to people "I'm suppose to see him" instead of "I'm going to see him" when it came to explaining my plans. And I had been frustrated - and calmly, with understanding, yet voicing it - for over a week. He texted daily, but we never saw each other. And my feeling - while polling other parents - that if you put yourself out there to date, that you should make sure you have the time to date, was growing. Gaining momentum. So this was the microscopic straw that broke the proverbial camel's back: 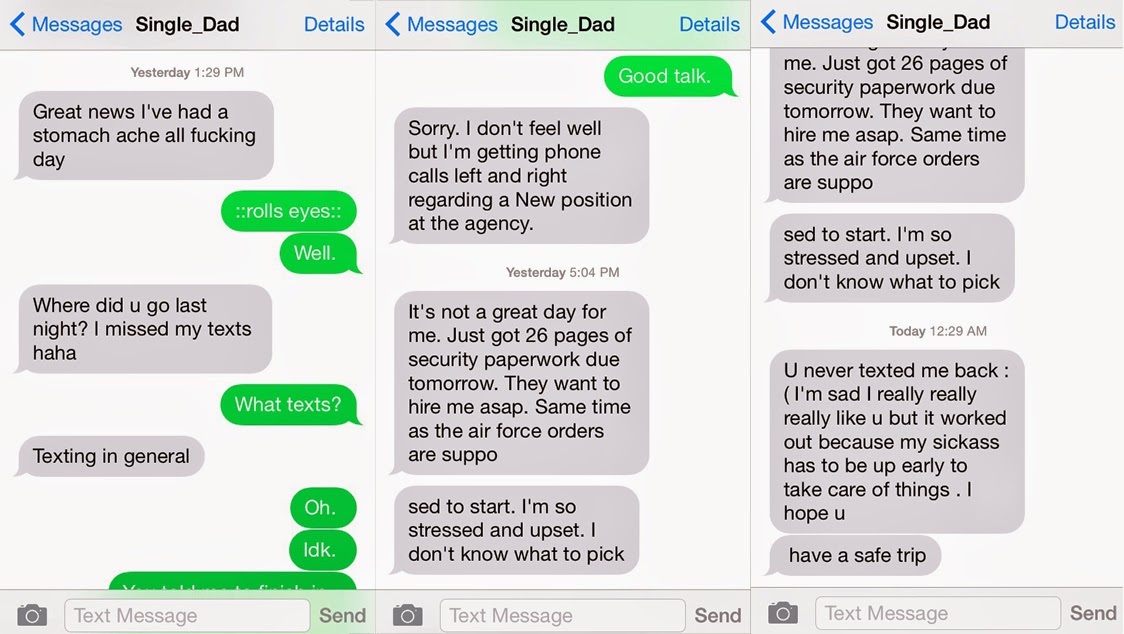 I have yet to respond. The most ridiculous part of this situation is that he seems to want me to feel sorry that he's sad for a situation of his own making. Like I'm suppose to coddle a man who has disappointed me yet again. Your fucking tummy hurts? Oh and you have paper work to do? - he adds as though his first excuse wasn't quite enough. And somehow I'm suppose to feel bad for him? SOMEONE CALL THE WAHBULANCE! This got laughable fast. And normally I would feel bad he was sick, but being the third (fourth, fifth?!) time in a month he had cancelled left my empathy to reside somewhere in the Valley of No Fucks to Give.

So while I tried the single dad dating thing, I'm not sure I can give an entirely accurate depiction of what it's like. I think this guy might be slightly more unaware of anyone else than most men. (Which is saying a lot! Seriously, you guys - other people exist and women are not here to kiss your balls at your beck and call, mk.) However, it did manage to neon-flashing-sign highlight the pot holes and warning whistles when it comes to single parents dating. So then perhaps he was the perfect person to try out and pass on the information. I would say the first thing to ask when trying to date a single parent (whether you yourself have kids or not) is: Do you have the time do date? Have you carved out space in your life for just you? If the answer is no, move on until the answer is yes. And consider it - at the least - a moratorium until the answer becomes yes.

This particular moratorium, however, is quite perfectly timed. I am actually rather thankful for it - as much as I am annoyed by it. (I'm fucking cute didn't you notice?! MAKE the time.)  Because tomorrow I'm taking off to Arizona and I was feeling sort of weird about going to stay the weekend at some guy's house while I was sort of dating someone. The weirder part for everyone else seems to be the fact that I'm going to fly across the country and stay with some guy that I met in a bar for 30 minutes 18 months ago. But Arizona is warm and he said it's free and I was looking for somewhere to go back in October and he asked. (I'm a simple creature, really.) My friends seem to think it's crazy and "what if he's a psycho". My mom, however said "I trust your judgement," but send me his address. She's used to these (simple) things I do by now. : )