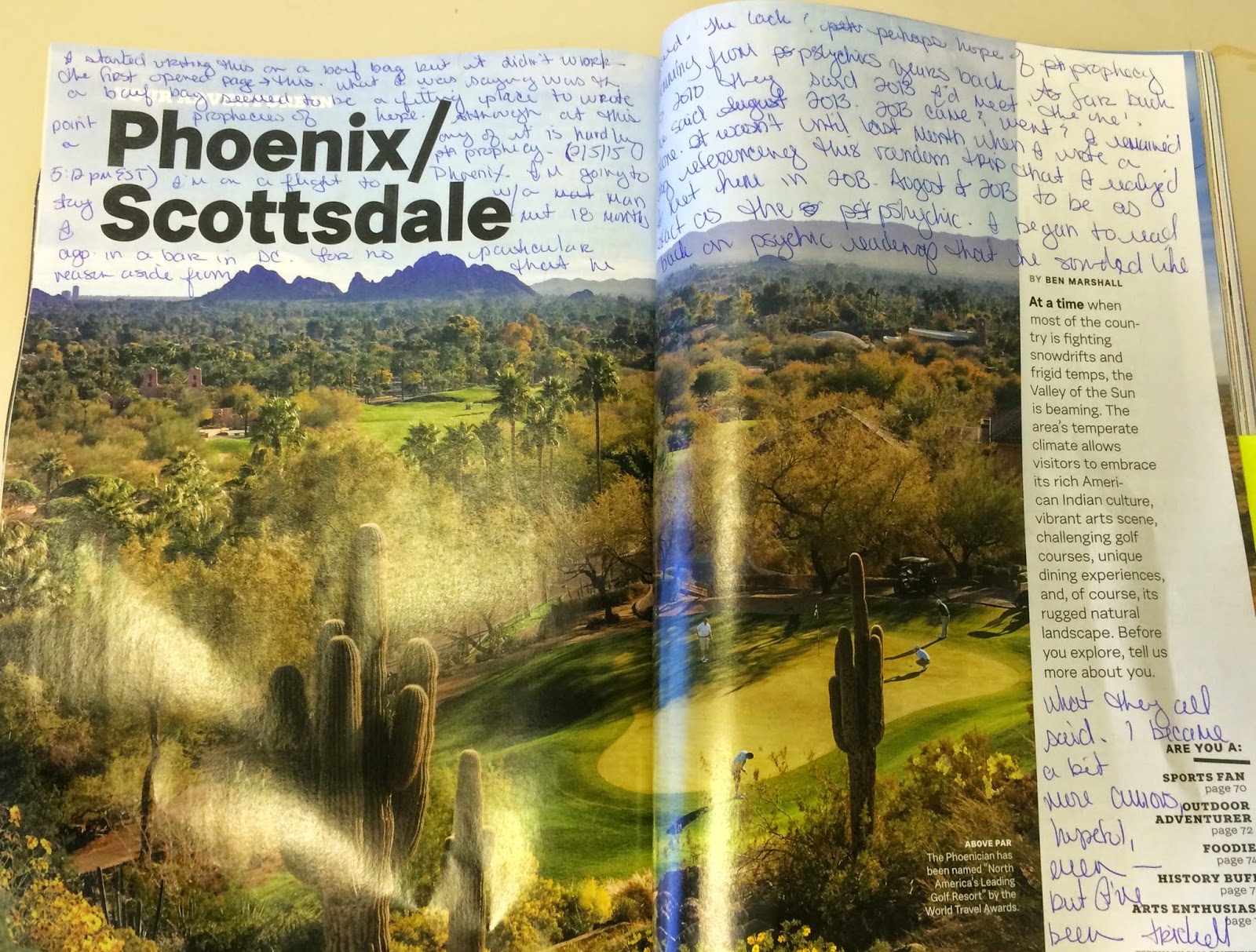 I started writing this on a barf bag, but it didn’t work. The first page I opened to was this [Phoenix/Scottsdale page in the airplane magazine, right]. What I was saying was that a barf bag seemed to be a fitting place to write prophecies of hope. Although at this point, any of it is hardly a prophecy.

I’m on a flight to Phoenix. I’m going to stay with a man I met 18 months ago in a bar in DC. For no particular reason aside from he offered [when I was looking for an escape post-Turk]. The lack and perhaps hope of prophecy stemming from psychics years back. As far back as 2010, they said 2013 I’d meet “the one”. One said August 2013. Then 2013 came and went and I remained alone. It wasn’t until last month when I wrote a blog referencing this random trip that I realized I met him in 2013 – August of 2013 to be exact. I began to read back on readings that he sounded like; what they all said. I became a bit more curious, hopeful, even.  But I’ve been tricked by the fallacy of their readings ‘fitting’ before (HG, The Turk). And yet I’m strangely hopeful – or had been. Then a touch nervous – what have I gotten myself into. Now nearly apathetic, but also wondering how to traverse this awkward (even for me) situation I am two hours away from walking into. And still, I hope.

He’s all the things on my list – tall, blue eyes, brown hair – as I told my mom yesterday (when she asked for his address half fearful for stranger danger and half still “I trust your judgement”).

“He is proof that those unicorns still exist!” I told her, garnering a positive out of the strange unknown. And then I thought: but maybe he’s not single, or perhaps terribly annoying; maybe he snores or whistles through his nose when he breathes! I don’t know. I’ve been anticipating this since I realized he fit the prophecy, but now it makes me nervous; after this - if it fails - what have I to look forward to? What have all the strange events of the last year leading to? Where is it? WHAT is it? I’m excited for things to come but anxious that if nothing comes of this, my hope again sits still – dead in the proverbial water.

But seriously --- WHAT THE FUCK AM I DOING? ::laughs to self so no one takes away her vodka tonic::