Last week, while reading Post Secret, I was particularly struck by 1 2 cards. The waterfall. And this one: 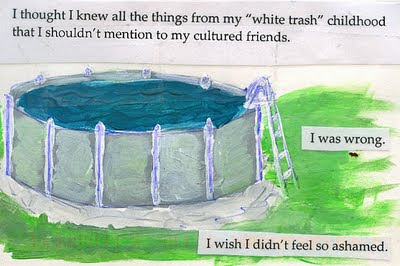 I was so struck by this notion that the pools we thought kids in our neighborhoods were lucky to have, people I have asked consider them "white trash".  Still twiddling my thumbs over the notion, I decided to comment on it here. So, by the power of Google, I found it again. And noted the first comment:

When I was a kid, an above ground pool was just a reasonable middle class option. "Cultured" friends who would make fun of that aren't really that cultured. [...]

Sometimes I wonder if I haven't thought enough. Or if the things I don't realize are blessings in disguise. I was caught off-guard by the thought that I didn't realize something so obvious to others was something I wasn't aware was part of defining "class", but I think where we came from is important to remember. And in life sometimes it's best to simply go with the "reasonable option".

Why should anyone judge a person by who they have been and where they came from if the person who stands before you is worth knowing?