'The Finesse of a Bulldozer'

Alternate Title: The One Where, Mr. Cuddles Edition

Last night was our last regular season volleyball game. This kid I had met three weeks ago at the bar post-volleyball had texted me yet again to ask if I'd be at the bar, because afterwards he'd like to come home and "cuddle". Allow me to present a short back story...

Picture it: Sicily 1926. DC Bar. August 20th, 2013. Approximately 9pm. Drinking water at flip cup. (Still recovering from Dewey.) A guy sets up at table next with his softball team and says if we need another player he'd play. He moves his chair closer to mine; I'm talking to GFC across from me. He welcomes himself into conversation. Shortly after, he asked if we had to pick, which of he and his other friend she or I would go home with. He put his hook in the pond and didn't care what fish he plucked out, as long as he got to eat that night. How appealing!

I told him that's not how the world runs. Normally people ask for a person's number, talk to them and then ask to go home with them. "Cuddle" was the word he liked to use. Later in the evening, once he had procured my number - a diversion/test tactic that clearly worked - he continued to text asking to come over to my place to "cuddle" and eventually owning up to that fact that he hoped that meant we'd "hook up". I did mention that we barely spoke that night, right? And the only reason he was getting away with any of it was because he was cute, with nice teeth.

But no one is that cute. At no point did I insinuate this was even the slightest of possibilities - aside from giving out my number (flippantly, per ush) - but he it continued text me weekly asking to "cuddle", eventually provoking me to ask if he was going to keep asking and once he said yes continued, "with the same tactics?"

"Not working so well so far. haha," I replied.

And to that, a lovely, mature response of: "haha is what it is but i'm also clearly not losing sleep over cuddling with you."

Um. Okay. This was getting good; three weeks later - last night, that is - it was even better. And that's when I decided to see how far I could take a conversation with someone before they would give up and go home. As it turns out, quite some time.

I can't imagine his tactics ever work. As GFC would put it: "He has the finesse of a bulldozer". Thank God I'm not 23 26 anymore. And for you, Internets, enjoy.

Preface: With no prior conversation in the evening - while at a table across from ours, four feet away - he texted me to ask me if he should go home or ride his bike to my house to "cuddle". (I shit you not.) I then left the bar and texted that I had left. He asked if he should ride his bike to my apartment, meanwhile I was heading to the metro and said he could only come over if he could beat the metro via bicycle and then play Trivial Pursuit with me. Note: The bar is over five miles from my house and metro is a 16 minute ride from that stop. That he even entertains the idea after this is ridiculous, but here we go: 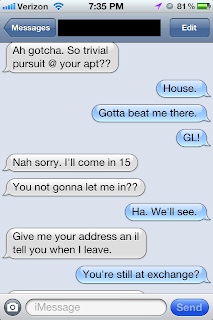 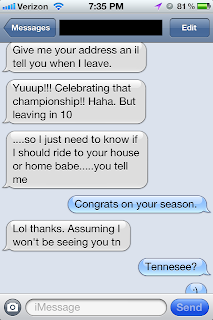 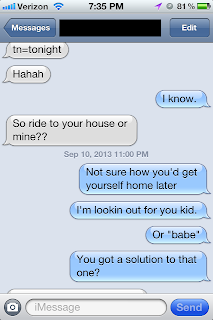 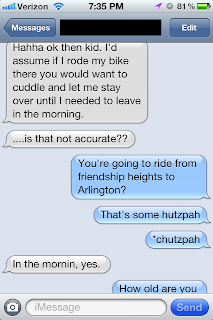 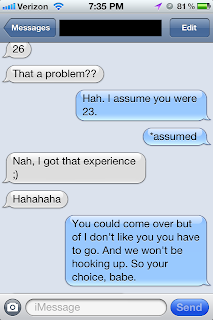 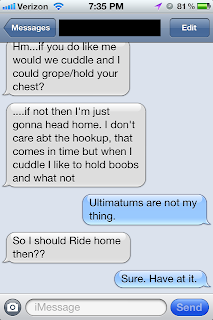 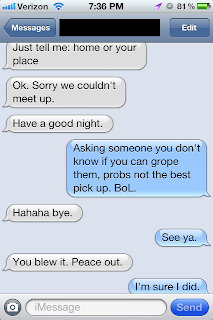 [EDIT 9/12/13: In a lazy/oversight on my part, I left the kid's first name on the screen shots - since removed - and a friend in years past plays in the same softball league as he does. She confirmed with his number - I unknowing of the circumstance presented the last four digits of - and boop! it got back to him. Whoopsie. I hope the juju doesn't chase me...but "grope", really? Anyway this, thus, shall mark the first and last time I put a real name on my blog. Let anonymity reign!]

Labels: really?, the one where

I need to start incorporating Grope in my text game.

He blew it. You can tell from the conversation that the writer was trying to get it in.

Sorry to disappoint, Anon(2), the writer was not trying to "get it in" as that would have broken the Maury Povich rule.

I bet that guy is only medium good and smells terrible

So how was it?

How was what? The night's sleep? Quite good.

Prob would have been better with a cuddle sesh #always