I swear I have more to say, I just haven't had to the motivation to find the photos and screen captures I need to finish out a post I composed days ago. But I'm here, I swear. And I'll write more than just re-postinglocating my ridiculous jaunt with online dating that I recently undertook, but until I kick my own ass into print screening submission, here's Part II of week four. 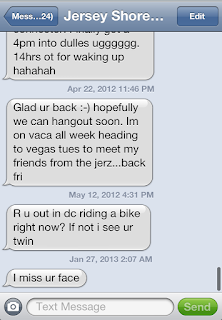 RH date two was dinner. Without the veil of illness, I began to see he was much surer of himself than I had previously thought. I can’t decide if this is a good thing, or just cockiness – with a pinch of insecurity he attempts to hide. He is also extremely willing to talk about past relationships, which again I can’t decide if that’s a good thing, or a bright red flag. Then again, both of these were the failing of the last guy I dated, so maybe the point goes to RH. I asked him why he deleted his profile and gave me a long-winded answer I could barely follow - something about wasting time and money on dates that go nowhere. Strange timing, sir.

But on the topic of long-windedness, his answers always took a while, which I warned meant I’d space out, so could he keep them succinct. He made fun of this – I think due to underlying insecurity – for a while until I said “Stop that, you’re getting on my nerves”. Guys, don’t badger a lady (especially one that is trying to help you out). Also, during the date he asked if he would get to kiss me again that night: Guys, DO NOT DO THIS either. Mk. It's awkward and uncomfortable: Instead, go all Nike on the ladies if you feel a vibe and Just Do It. Regardless, after dinner and more drinks, he walked me to my car and I let him kiss me - slightly more impassioned than I was feeling, which led me too believe he may be slightly aggressive when it comes to that stuff. (I got home he texted to thank me for coming out and that next time he wouldn’t “abuse” me – in reference to the badgering. Good idea, dude.)

As a caveat, I should probably explain that I really like kissing. I think during first dates – and perhaps subsequent second dates – a kiss makes a guy go “SCORE! I’m in.” when I’m just there going la la la. I like kissing… (similar to how I feel about spooning/sharing my bed).

Which brings us to the second second date: Dinner with MH. He decided we'd go somewhere in my neighborhood. I have no idea why he wanted to go around there: Convenience for me? Parking? He leaves work before me? He figured we'd go back to my house for the no pants dance? I’m not sure, but we had dinner down the road from my house. I had to request he pick me up instead of meeting at the restaurant. GUYS! Offer to pick a lady up. She can decline, but fucking offer. Even if you don’t have a car – offer to meet her at her house and go together…eh-hem Housewife. I know it’s online dating, but your tongue’s been in my mouth; you can come to my house.

But I digress, we went to dinner, during which time, I began to see him differently: More comfortable; less feminine. (Or maybe I was just ovulating last time and extra sensitive to effeminate gestures and Madonna praises.) After dinner – of which all dinners in dating appear to automatically include cocktails, which I like – he had to pee. We could not, for the life of us, find the bathrooms in that place even after asking staff for help – although we did find “Hipster Fight Club” (as he put it) a.k.a. 20-somethings playing ping pong in the back. I told him to give up and pee in a bush. And then I decided that's sort of rude and said he could just use my bathroom. So we headed to my house. If this was his plan all along, he is a fucking evil genius. And I should have fucked him eight times on my front porch out of sheer respect for such a masterminded plan.

Because once in my house, he broke is iPhone with a Praying Mantis. As in, he went to poke at the thing with his phone and when the bug touched him, he panicked and flung his phone on laminate. Point: Effeminate. After he failed to make it turn back on, I started to feel guilt – since I was the one curious about the Mantis – and told him I would fix it if he gave it to me. Men don’t like to be called assholes; they also don’t like to be told a woman can fix something they, themselves, cannot. I took it anyway, went upstairs and put it on my docking station. After a bit, he got bored (I assume) and came upstairs as I continued to troubleshoot. I got it working, but slightly embarrassed by the state of my room – and him checking it out – I started to pick up a bit (clothes were strewn about since I’d been busy/sick/on travel). Eventually he turned to my DVD collection and after about 10 minutes in my room, asked if we could watch Aladdin. So we did. I love a good cuddle. And then he ended up sleeping there. Did I mention I love a good cuddle?

There was spooning and kissing. And after telling him to go to sleep, and essentially giving him the ol’ blue balls shove off (okay, he likely didn’t have blue balls, but I like this term I just created), he said, “Okay. I’m patient.”

“That’s good,” I replied, wondering if he thought Aladdin would actually lead to sex – and on a second date. (Barking up the wrong easy-tree there, guy.)

Regardless of timing, that patience may come in handy, because, as it turns out, I think I’ve come to realize that these men are being vetted: Once I decided to go on dates, I wondered what I was doing since my interest in a relationship right now is minuscule to rolling over and playing dead. But, perhaps I’m looking for someone to scratch that Loop itch until Monogamist Mary pops on over to my crib again. So now I wonder, is it either of them? And do I need to tell these "relationship" "matches" that I'm Short-Term Sally at the moment? Furthermore, is it a horrible idea to date just mostly for sexy time - and spooning? I’ve been there with a crush and that's the Crashed and Burner; are pseudo-strangers are a safer bet?

And if I go through with scratching the itch, it leads to even more questions because you (well, I) can’t sleep with more than one person at a time so: 1. How do you decide? and, 2. How do you tell the other perfectly suitable person to shove off?