The Importance of Ice Cream Cake

This weekend was a whirlwind ending up in an ice cream cake we bought for no reason whatsoever: Except for that we passed a Baskin Robbins on the way back from the auto parts store and we wanted to, which seemed to be reason enough to buy a princess-themed ice cream cake. It was the only one in mint-chocolate chip. 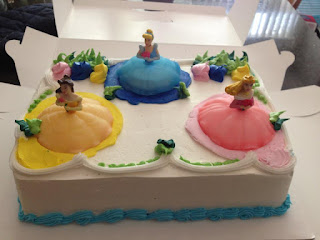 And then we sat down and ate it - sans bowls, nearly sans spoons - while watching "Gladiator" and wondering where we went so right in our lives. To mark off our accomplishments for the day, we changed my taillight and I went through my friend's donation bags, which lead to this car maintenance outfit: 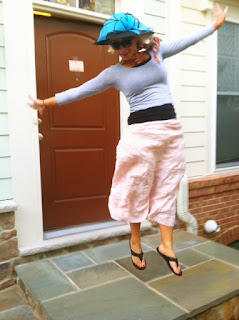 Meanwhile, I check Facebook and read a post from my sister about how much she loves her babies. I love them too - but lets juxtapose these posts, shall we?

She is only two years older than me and my Sunday is spent eating brunch, then ice cream cake, then Chinese food with my friends that woke up slightly hungover at my house that morning after a mutual friend's 29th birthday party - and one very singularly victorious beer pong game - (Evidently, it's the boy partners that drag me down.) with the day's largest accomplishments consisting of second hand clothes and new tail lights.

And this only after I went out Friday in a bare midriff top, danced my ass off and had a great time without two cares in the world - from what I recall, because apparently my memory stopped dead in the tracks of a vodka Red Bull. I blame the Red Bull. Seriously. And the forgetting may be a shame, considering after my friend's bridal shower the next afternoon, I went to a local arts festival - her mother gave us margarita filled bubba kegs - with some of the other attendees, during which time I got a text: 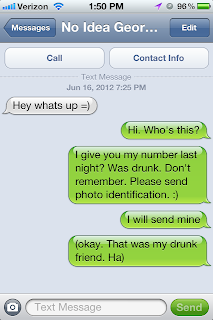 Obviously I didn't recall this person. And unsurprisingly, the fair egos of Georgetown's trotting men don't seem to take kindly to being forgotten - or rather, never remembered. In the future, perchance I'll just continue the conversation first and ask questions later. However, if anyone has any chance to date me, their egos must be much less fragile than this. Especially when they meet me when I'm dressed like this: 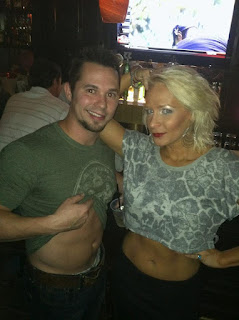 On the left is my friend. We went for the tipsy ab contest. He texted earlier that day while I was debating if I was going to have a date that night with Ben and Jerry to tell me we're going out; his brother was in town. So that happened. And I magically woke up in time for my friend's bridal shower, sans alarm. So after the shower and after the arts festival, I had to head home for the birthday shindig. And I awoke on Sunday morning, The Greek having texted me the night before with an :p emoticon, I texted him back questioning the lack of drunk voicemails this weekend; as last weekend he had left one at 2am that I came upon on Tuesday and so generously deleted, per request, without first listening. Lucky chap. And decided, thereafter, that flowers are pretty and any man makes the lexical choice to (sincerely) call me "beautiful", is one worthy of my heart. Not that the compliment wasn't nice, I was quite flattered "damn you're pretty" is always nice to hear - especially at 11am after 6 hours of sleep and looking like less than ravishing. But there's something about that word "beautiful". (Who doesn't want to be more stunning than a flower?)

So who's The Greek? He's just a guy I met a few weeks back after a seriously impressive day of day drinking and bar crawling. Remember my hiatus? This was part of that.

The first week of June is always the VA Vintage Wine festival. For the 3rd year, at 10am we hopped on a charter bus, headed down there, drink for 8 hours and then ride back up. While there, I met up with my aunt who lives locally. Rather uneventful aside from getting in an argument with asshole on the blanket next to us because they refused to give their passed out friend water and she was unresponsive and my aunt, as a trauma nurse, has a civic duty to help - (then the girl woke up pissed off passerbys were mistakenly? concerned as she was "napping"...hoooooooooookay) - which led to one of the middle-aged men taking off his shirt and trying to fight the dickhead twenty something who wouldn't wake up the girl friend and then started throwing garbage our way 20 minutes later. This was normal for us, but the middle agers seemed to really get a kick out of the whole thing. 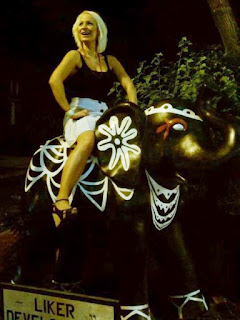 So on the way back we shared a couple bottles of wine and then I time-traveled in my head to being showered and ready to go out all over again for mutual friends' shared birthday bar crawl. In essence: I bar crawled to sober up. Ha! So fast-forward a couple of hours, after I walked across the Key Bridge, rode a concrete elephant and sat at the bar garnering a free cider than moving towards the dance floor: I'm standing there watching my GBF dance with a frenemy, a man came up to talk to me. He asked for my digits and, per usual, I complied. He said his phone was dead and my response was: Then memorize it. I'm not even kidding, he did - and how to spell my name correctly. Before he left, he even came up to me to double check his memory and when he texted the next day all I could wonder was why he didn't grab a napkin and a pen from the bar. A few minutes pass returned,  checked my number/his memory again, then left; Just then a Marine came up to talk to me about that girl I was watching and the state of her self-esteem problems and daddy issues, to which I responded: I know her (haha - but I'm not a fan). We started to chat - his friend came to chat - and my girlfriend N started dancing with their other friend. Fast forward again: We close down the bar and - after 15 hours of drinking - cabbed back, wherein I insisted we go eat. And then girlfriend C left her phone in the cab.

Having previously made friends with the driver - myself at a pleasant point of tipsy - he was a fan of us. So she borrowed my phone to call hers. While using my phone and standing in the lobby, I'm facing her while standing next a table. In the middle of trying to get her attention I hear someone to my right say to his friend "She's pretty. Tell her she's pretty." After repeating this a number of times, I turn and say "thank you" and go on trying to get my friend's attention. This is The Greek.

After this I walked up to my girlfriend C, the cab pulls up and she gets her phone back leaving me to tip him as she refused to give him more money for doing a nice thing. Returning back into the diner, The Greek stops me. We sit there, leaving the Marines we had met at our original table with my girlfriend N - who I later would learn talked smack the whole time about The Greek and his friends. They called them frat boys and preps and picked on their polos - of which some of the talk I caught having left that table later, returning to the Marines because my friend was being completely definite about everything as The Greek told her "you are the angriest person I've ever met" "why are you so angry" - at which point 1. his friend left because she was too much for him and 2. I decided The Greek could have my phone number. Then I wrote my number on a napkin and went back to the Marine table. Then one of the Marines got locked outside and was knocking on the window to tell us to let him in, to which we responded it's not locked because it's a 24 hour diner, to which - while still knocking on the window, we were then asked to leave because they are, in fact, not a 24 hour diner.

And then we went back to my GBF's place - the one we went to wine fest with that didn't quite rally as well (instead of the sober up tactic I seemed to us, he drank 2 forties to earn points for our crawl "team" - kudos) - and found him passed out on his front door. I'm sorry, my friend, but that is a visual I will cherish for the rest of my life. That and the princess themed ice cream cake because: "whose birthday is it?" "no ones. i just wanted ice cream cake." Just because.

[Edit: Gchat Snippet:
me: B, am i suppose to want a family right now?
because eating ice cream cake and chinese food and watching movies with my friends yesterday seemed like a much better idea than taking care of kids.
B:  hahaha dude. I've been feeling the same exact way lately.]

Having previously made friends with the driver - myself at a pleasant point of tipsy - he was a fan of us. So she borrowed my phone to call hers. While using my phone and standing in the lobby, I'm facing her while standing next a table. In the middle of trying to get her attention I hear someone to my right say to his friend "She's pretty. Tell her she's pretty." After repeating this a number of times, I turn and say "thank you" and go on trying to get my friend's attention. This is The Greek.
oversized super king duvet cover
oversized white duvet cover king